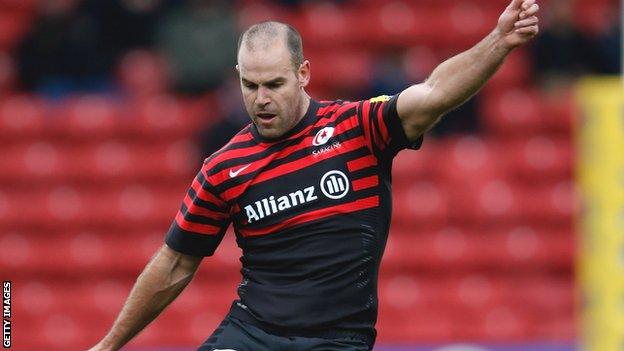 Charlie Hodgson produced another reliable kicking performance for Saracens, who moved up to second in the Premiership with victory against Wasps.

A try from Saracens lock Alistair Hargreaves cancelled out Tom Varndell's early score as the two sides went in at the break locked at 14-14.

But fly-half Hodgson's total of 21 points proved the difference.

Wasps' run of four straight wins is at an end, but they earned a losing bonus point with a try from Charlie Davies.

Dai Young's side, who had won in each of their last two Premiership outings, drop to eighth in the standings.

Saracens, who are now level on points with leaders Harlequins at the top of the table, were playing their first Premiership game at Vicarage Road this season, having staged their previous two home fixtures at Twickenham and Wembley.

They went ahead inside two minutes with a Hodgson penalty, but the visitors hit back straight from the kick-off as the back three of Christian Wade, Hugo Southwell and Varndell combined to allow the former Leicester winger a routine score in the corner.

It was his seventh try of the season and his 67th in the Premiership, taking him clear of Tom Voyce in fourth position on the all-time try-scorers list.

Then Wade's kick and chase forced Hodgson to carry the ball over his own line, and from a scrappy resulting scrum, Robinson slotted over a drop goal.

Two quick penalties from the experienced Hodgson put Saracens back in front, and they extended the lead further when South Africa international Hargreaves charged down Davies's kick to score.

Hargreaves was sin-binned just before the interval for entering the ruck from the side - Saracens' seventh yellow card of the season - as Robinson brought Wasps level at half-time with two successful penalties.

The game was held up for several minutes while Hargreaves received treatment before being stretchered off following a clash of heads with James Haskell.

The hosts responded better to the lengthy stoppage, as Hodgson took advantage of a series of Wasps infringements to nail four more penalties and put the result beyond doubt.

But scrum-half Davies charged through the line to earn Wasps the losing bonus point they probably deserved from a tight encounter with three minutes remaining.

"The first half was a bit of a disappointment but I'm just proud of the players for getting the job done.

"It wasn't an easy day to play rugby and Wasps really put it to us. They were really physical and made life very hard.

"But, given the number of players missing, our younger players stepped up.

"It's been an unusual 10 weeks. We've been everywhere and we came back today to our 10th different ground so I'm very proud of the whole group.

"To have got through the 10-game period and lost only one game is exceptional."

"I was pleased with a lot of aspects of our performance but when you step up a level - and that's what we've done against Saracens today - you have to be better.

"Those little important lineouts, the little kick-chases and giving away too many penalties cost us and we were chasing the game.

"I was pleased that we came back in the last 10 minutes and came away with something but if we want to mix it with the real top guys, we can't keep making those errors.

"Our penalty count wasn't something we can be proud of and we have to make sure we are more disciplined.

"We had an opportunity today but you have to be efficient and effective because we all know how efficient Saracens are at squeezing games out. That's something we have to get better at."