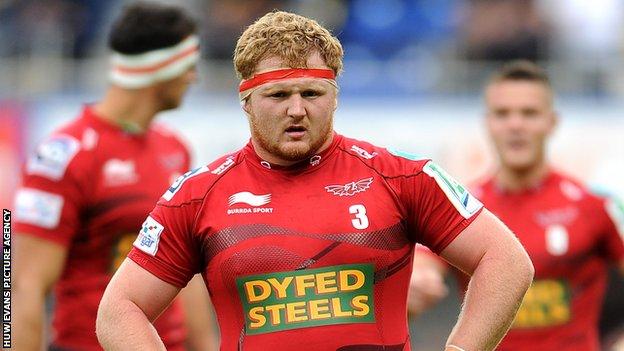 Tight-head Jones will miss all four games against Argentina, Samoa, New Zealand and Australia with a knee injury.

But Aaron Jarvis, Scott Andrew and Samson Lee are now in the frame.

"All three of them could do a job, but it will be about who takes the opportunity," said Rees.

"Adam is a loss, but we have got three pretty good players there waiting in the wings at the moment.

"And the challenge for them now is to kick on and impress the coaches and take their chance when it comes."

Rees insists all three of Jarvis, Andrews and Lee have their chance to claim the number three jersey.

Lee has come in as a replacement for Jones who suffered a recurrence of a knee injury in Ospreys' Heineken Cup defeat away to Leicester.

"I know Samson well, he's been there all season for the Scarlets. He has come through the academy structure and he will want to go well in Poland this week to put pressure on the others," Rees added.

"He is a great young prospect and definitely one for the future.

"Scott has been involved with Wales before and he knows what it's all about.

"Aaron is here on performance, he's shown he can do it for the Ospreys this season so, probably, the only thing he doesn't have is that international experience."

But with the hard-scrummaging Pumas first up on 10 November Wales might be persuaded to go for a more experienced option.

Bath prop Paul James could move across from loose-head, while Toulon's Gethin Jenkins has also played at tight-head.

"We have props who can play both sides of the scrum, with Paul James and Gethin Jenkins both able to move over and it will be up to the coaches when it comes to selection," added 54-times capped Rees.

"But I can certainly see one of these youngsters coming through and getting to the next level over the next three or four weeks."

But, while there is competition for prop places Rees knows only too well he has a battle on his hands to make the hooker's jersey his own.

He is currently engaged in his own contest for selection with club-mate Ken Owens and Ospreys hooker Richard Hibbard.

"It's great to have competition for places," the former Wales captain said.

"I've got Ken at the Scarlets and we both push each other hard and with Richard playing well for the Ospreys we are all fighting for that jersey."

As well as Adam Jones, Wales are without first-choice blind-side flanker Dan Lydiate, who suffered an ankle fracture.