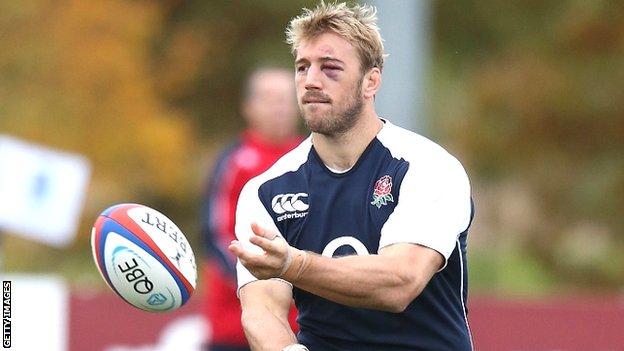 Chris Robshaw has been named England captain for the autumn internationals.

The Harlequins flanker, 26, will lead his country against Fiji, Australia, South Africa and New Zealand.

"I enjoyed being captain in the Six Nations and South Africa. It's a real honour to be asked again," he said.

"The reality is they won't be available for the Fiji game [on 10 November], they're both reasonable injuries," said Lancaster, who added that prop Joe Marler (hamstring) should be fit.

"We're confident in Joe. We were being careful with him this week. All the medical info I'm getting is he'll be good to go on Monday."

Robshaw made his England debut in 2009 and during the Six Nations and the summer tour to South Africa.

England won four of their five matches in the Six Nations but lost 2-0 to South Africa. They drew the final Test of the three-match series, a game in which Hartley led the side because Robshaw had broken his thumb.

Lancaster he had yet to decide on his captain for the autumn but on Tuesday he explained Robshaw had earned the right to remain in the role for his "outstanding" contribution "on and off the field".

"We have a strong leadership group in this squad and I know that Chris will be well supported by them in the weeks ahead," Lancaster added.

"It was important to wait until after last weekend's Premiership matches to check on everyone's form and fitness and not interrupt the players' preparations.

"I have had the chance now to have a one-on-one catch-up with each player and we are really pleased to announce Chris as captain."

Robshaw added: "We are lucky to have some good leaders in the squad who I know I can work well with and count on their support.

"We have a huge opportunity to put a marker down over the next few weeks and just from training this morning you can see how keen the boys are to play."

Matt Mullan of Worcester Warriors and George Robson of Harlequins, who were initially called up as injury cover for Joe Marler and Lawes, will train with the squad on Wednesday before returning to their clubs.

Lancaster insisted those involved in Premiership action this weekend will remain in consideration to face Fiji at Twickenham.

"Some return for further treatment from their club and others to get some game time to put a marker down for selection for when we meet again on Sunday after the weekend's games," he said.

"We will not finalise selection for the Fiji game until after training next Tuesday and so for those going back and playing this is a real opportunity to stake a claim with a really big performance."