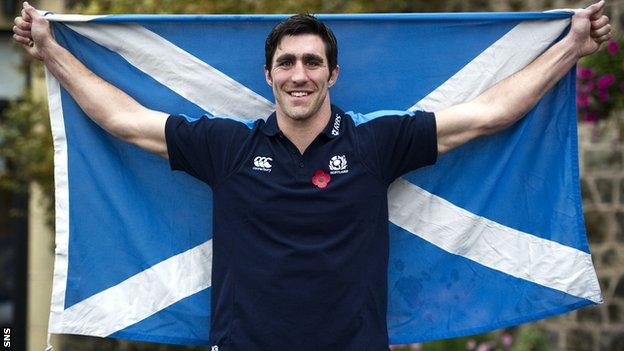 Kelly Brown has been named as Scotland captain for the Autumn Test against New Zealand.

Brown was due to skipper the side before injury ruled him out of this year's Six Nations where Scotland lost all five matches.

"It's obviously a huge honour and I'm really looking forward to the challenges ahead," he said.

"It's been so long since I've actually played for Scotland (September 2011) so I'm really, really looking forward to that.

"And we're playing against the best side in the world so it's a massive, massive challenge but one, I'm sure, we'll thrive on.

"I was asked and then I got injured. I was aware it may not happen again.

"I just wanted to work as hard as I possibly could and it's a huge honour to be asked to captain the side again."

The former Glasgow Warrior, who takes over the captaincy from Ross Ford, suffers from a stammer which he has addressed with the help of the McGuire Programme allowing him to now speak fluently.

But the number eight is not planning on making too many long-winded speeches.

"I'm more a man that would like to lead with his actions," he explained.

"When something needs to be said I will say it, but my main role now is to make sure everyone in the squad knows exactly what's expected of them and that they just focus on doing their role as best as they can."

It is a similar method to David Sole and Finlay Calder, men who Brown cites as leadership inspiration.

"If I can be half as good as they were as skippers then I'll have done a pretty good job," he said.

Head coach Andy Robinson outlined the qualities he said made Brown the right choice to captain the national side.

"Kelly Brown is an inspirational person," he said.

"He has an aura, confidence and belief about him and a firm understanding of the game. He has been a very consistent performer for Scotland."

Brown will win his 50th cap against New Zealand at Murrayfield on 11 November.

The Scots then face South Africa on 17 November, also at Murrayfield, before hosting Tonga in Aberdeen on 24 November.

"Ross has performed well as a captain, he understands why the decision has been made," added Robinson.

"We have Al Kellock and Greg Laidlaw - the Glasgow and Edinburgh captains - we have Mike Blair and Rory Lawson, who have both captained Scotland before.

"One of the key aims for me as the coach was to develop leadership, I look at this squad and it just shows you how the leadership has developed between the players."