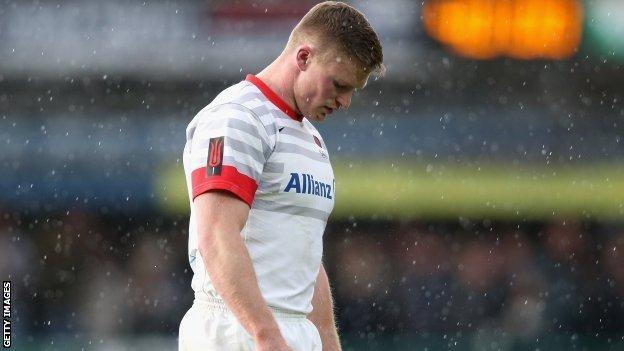 Chris Ashton has been suspended for one week and will miss England's opening autumn international against Fiji.

The Rugby Football Union has imposed a ban running from Sunday 4 November to Saturday 10 November.

Ashton is free to play from Sunday 11 November - the day after the Fiji Test.

The Saracens wing, 25, received the ban after a dangerous tackle on Northampton's Vasily Artemyev was retrospectively judged to be a yellow card offence - his third of the season.

The ban does not include this weekend as he is inactive, having not been released by England to play for Saracens in their Premiership game against Wasps.

Ashton was sin-binned for a yellow card in the opening match of the season against London Irish - his debut for Saracens - for a late tackle on Steve Shingler.

He was also sent to the sin-bin at Exeter in the fourth round of games after leading with his shoulder as he barged his way into a maul.

Ashton was suspended for four weeks last season for unsportsmanlike behaviour after pulling the hair of the Leicester wing Alesana Tuilagi.

The former rugby league player was also banned for a week during his first season with Northampton in the old National League One.