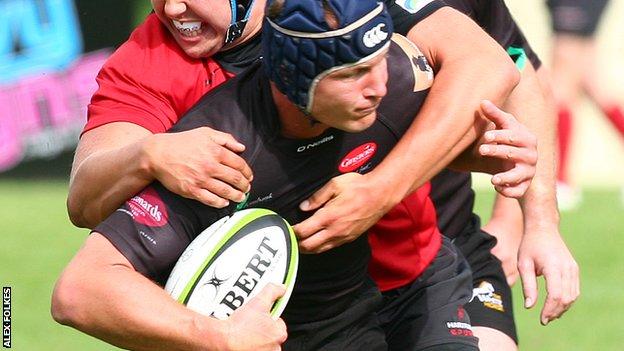 Launceston captain Tom Rawlings hopes his side have found consistency in their performances after beating Lydney 17-12 in National Two South.

The Cornish All Blacks moved up to sixth in the table after getting two consecutive wins for the first time this season.

"I'm glad we've found consistency now, a couple of weeks ago we probably would have blown that," he told BBC Cornwall.

"I think it shows we've turned the corner."

Mike Rawlings' try gave Launceston a 7-6 lead at half-time, which they extended soon after as Josh Lord went over.

Anthony Wicks kicked two penalties, to add to two he got in the first half, to bring Lydney within two points of Launceston.

"It wasn't a pretty game," Rawlings said. "If you look at where Lydney are in the table, they've only won one game and I think the boys felt they were going to go out and put a healthy score on them.

"But we said that every Lydney side you play against are going to be dogged, hard, and scrap for everything.

"Lydney did that and sucked us down to their level, but despite that we came away with the win."

And with Launceston having a week off, Rawlings hopes that he and his team-mates can keep their winning run going.

"I'm really happy that we've pulled together over the past few weeks," he added.

"People having been speaking about our inconsistency, but we've strung together two wins now, and I hope we don't lose it after this week off."