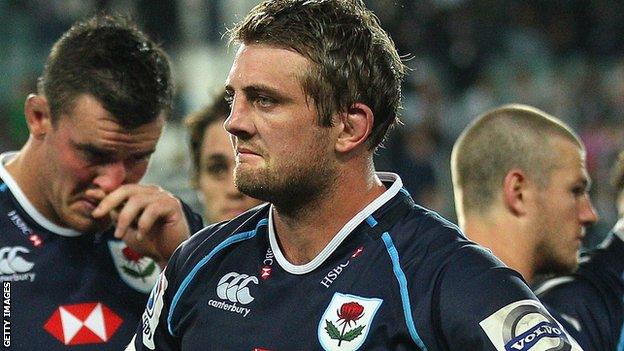 Exeter's Dean Mumm says it is important the club get back to winning ways after three straight losses.

Mumm has been pleased with the showings against and but Exeter have not won since they on 6 October.

"Performance is a nice thing, but if you go through the year performing well but not having the points it doesn't mean a lot," he told BBC South West.

"It's important for us to get back and get some points on the board."

The 28-year-old Australian international after moving from the Waratahs in the Super 15.

He made his Chiefs debut in the win over Harlequins and also featured in the losses at Bath and Leinster.

"The teams that are really successful, like Leinster and Clermont, are the ones that win even when they're not playing well," added Mumm.

"You've got to be able to win games when you're not performing and win those when you are playing well.

"We might not be doing that at the moment, but I really don't think we're far away, the ambition's there and that's an important thing."

Mumm has 33 caps for his country, but, despite that pedigree, has not been an automatic choice in the Exeter second row as James Hanks, Aly Muldowney and captain Tom Hayes have all been pushing to start.

"It's extremely healthy for the club to be in a position where they've got competition for places," said Mumm.

"It's the environment I prefer to be in, it gets the best out of you personally, but also out of everyone else.

"In the second row we've got five or six people who can cover a spot with equal grace and it's very competitive so I'm enjoying the challenge."