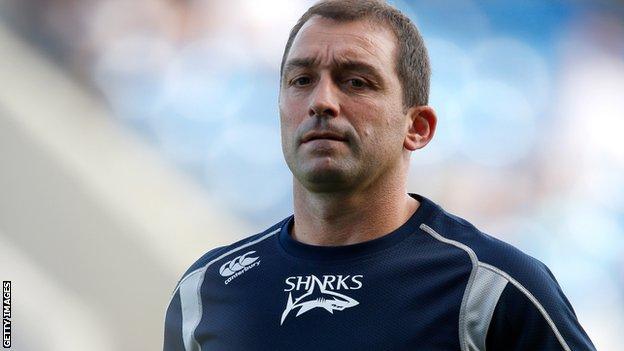 Bryan Redpath has been appointed as head coach of Sale Sharks after being earlier this week.

The former Scotland international will form part of a new "Rugby Strategy Management board" and his four-year contract with the club will continue.

Steve Diamond has already announced he for the remainder of the campaign.

Sale have lost all seven Premiership games - their worst start to a season.

And chief executive Diamond, who took charge of Sale for the final weeks of last season following the departure of previous head coach Tony Hanks, said on Tuesday the "whole fabric of the club was in danger of going into oblivion" unless changes were made.

He added: "The team is going to be run by myself from now on and we want Bryan to be part of us in the skill sets that he shows on a regular basis but I'll be taking over control of the team with immediate effect.

"It is a sideways move [for Redpath] and it will be for the benefit of the team. He is definitely keen to stay. He is very positive about the situation."

On Wednesday the club announced the new board will be chaired by owner Brian Kennedy alongside co-owner Ian Blackhurst, Diamond, Redpath and former All Blacks coach John Mitchell - who has acted as a consultant for the Sharks.

Redpath's only win as director of rugby came in the Heineken Cup against Cardiff Blues, but his other eight competitive matches in the role ended in defeat.

In a statement, Kennedy said: "We are delighted to announce that Bryan Redpath will be taking on the role of head coach of Sale Sharks as from today [Wednesday].

"His four-year contract that commenced this year will stay in force.

"Sale Sharks have formed a Rugby Strategy Management board which will meet regularly to devise and review the long term rugby strategy.

"The priority of all the management within Sale Sharks is to get back to winning ways and secure our position in the Premiership. We believe we have the playing and coaching talent and structure to achieve this.

"Beyond this, we must plan medium-term and long-term to compete at the top of the game and this will be the remit of the strategy board."