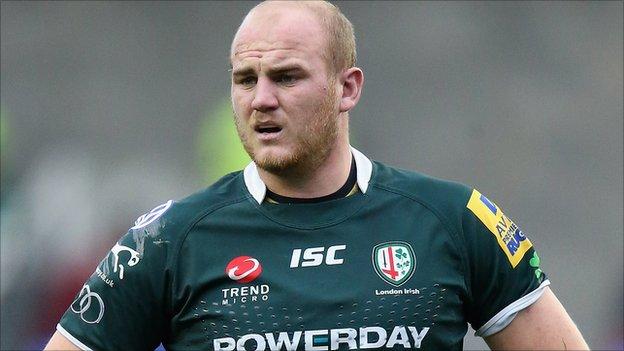 London Irish's Matt Garvey says it is time they started to dominate opponents ahead of Friday's game at Sale.

The Exiles have made an inauspicious start to the season with only Sale below them in the Premiership table.

But forward Garvey believes "the table does not reflect how well they have played this season".

"In the past we have felt like we were getting bullied in our own back yard and now it is time we become the bullies," he told BBC Radio Berkshire.

"It's nice to be playing in a pack that goes forward.

"Sale are desperate and they are fighting for everything. It won't be pretty but we know what we have to do and hopefully we can come away with a win."

Significantly the Exiles have eight more points than Sale and are level on points with London Welsh above them.

And Garvey says despite not making the start to the season they wanted, the mood in the camp is very positive.

Garvey, 25, also says he feels they have a squad capable of taking them game to opponents.

"Two of our good performances were in the Amlin but also you have seen how well we played against Northampton and Quins," he said.

"We've shown that we are a better team then the league table shows.

"Brian Smith is focussing on the positives and it is a happy mood in the camp. We are gutted at the manner in which we lost last weekend but we all pumped up and looking forward to Friday night."

Garvey also believes that with Smith back as director of rugby following a period away while backs coach at England, the club could be on the verge of a very exciting new era.

"There are a lot of players that have come through the academy and who have been through thick and thin together," he said.

"You saw what Smithy did the last time he was here and I feel we are on the brink of something special."