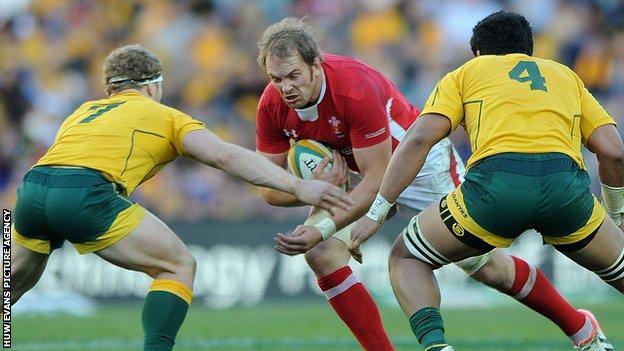 Alun Wyn Jones wants Wales to make amends for missing out on victory over Australia in the summer.

Wales suffered a 3-0 Test series whitewash by the Wallabies in June, twice seeing wins slip through their fingers in the final minutes.

Jones wants Wales to banish those narrow defeats with victory in the autumn Test series, which ends with another crack at Australia.

"Australia was tough to take for us all," said lock Jones.

Argentina, Samoa and New Zealand will be Wales's other opponents at the Millennium Stadium in November, before the Wallabies come to Cardiff on 1 December.

Jones is now an integral part of the training squad currently working at same Olympic training village in Eastern Europe which was used prior to the 2011 Rugby World Cup.

The 27-year-old is confident Wales are ready to finally beat one of the big southern hemisphere sides next month having come close in three summer Test against Australia.

"To end the series with only 11 points the difference across the three matches shows weren't far away, but that's not good enough for us and we are determined to keep going," said Jones.

"This team has reached the semi-finals of the Rugby World Cup and won the Grand Slam last season, after success like that there are always going to be tough times ahead, as teams will be well prepared for you.

"But we didn't drop off, we know we could and should have won anyone of those games in Australia and we are pushing the top teams in the world game hard.

"We have the top two teams in the world in our own back yard this autumn and we have another great opportunity to make our mark."

Wales will open their Autumn Test series against Argentina on Saturday, 10 November.

Jones, who made his debut against Argentina in 2006, is no under illusions of the task facing Wales when they face an Argentina side fresh from their first Rugby Championship campaign.

"Going into the autumn they'll be battle-hardened and a lot of their boys will have had game time," said Jones.

"When Warren Gatland first took over Wales he had a mantra to play against the top three sides in the world, namely New Zealand, South Africa and Australia.

"So as a nation we should be a little envious of Argentina now, seeing them in the Rugby Championship and playing against the best sides in the world.

"They're only going to benefit from it and as I say, look at their performance against South Africa. They were very close to taking a scalp there and as we've improved in our performances, so have Argentina."