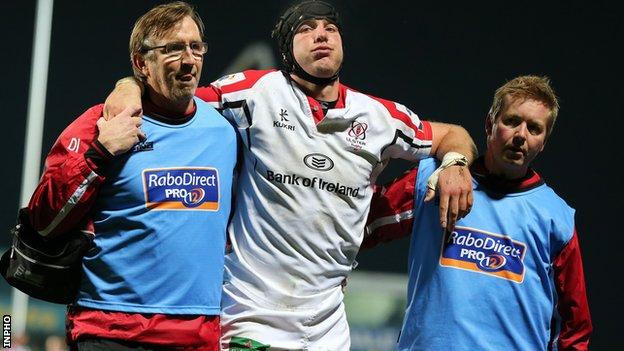 Ulster forward Stephen Ferris will miss Ireland's autumn internationals with South Africa and Fiji after limping out of Friday's Pro12 win over Edinburgh.

The 27-year-old flanker sustained an ankle injury and his fitness for the Argentina game will be assessed later.

Ferris twisted his right leg awkwardly when he was tackled after making one of his trademark surging charges.

Ulster team-mate Lewis Stevenson is out for up to six weeks after picking up a knee injury against the Scots.

The second row limped off in the 39th minute after suffering medial ligament damage, but the in-form forward may return in time for Ulster's Heineken Cup double-header against Northampton next month.

Ulster currently have Neil McComb as their only fit lock - captain Johann Muller is sidelined with a thumb injury, while Dan Tuohy and Iain Henderson are training with the Ireland squad.

The ankle injury is the latest setback for Lions star Ferris, who was recently sidelined by a back problem.

Ferris had to be helped off the pitch early in the second half and on Saturday the ankle was still badly swollen.

On 17 November, an Irish XV will play Fiji in an uncapped friendly international at Thomond Park in Limerick.

Immediately after Ulster's bonus-point win over Edinburgh, coach Mark Anscombe admitted Ferris was unlikely to face the Springboks this weekend.