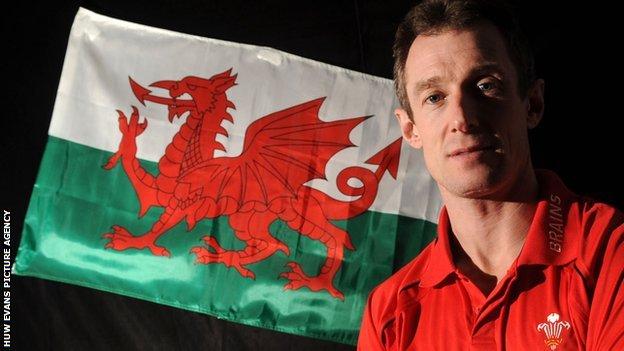 Having risen to prominence as a world class scrum-half before becoming an aspiring coach in the goldfish bowl of Welsh rugby, interim national coach Robert Howley needs little in the way of an introduction to the job's pitfalls.

And while he may not feel under pressure as caretaker, while Warren Gatland largely concentrates on British and Irish Lions duty this season, Howley could not have ignored one particular face in the crowd in the press conference that followed Wales's 26-12 defeat by Argentina.

This autumn, Howley has one more chance - against Samoa in six days' time - before Gatland returns to Wales duty to take charge against New Zealand and Australia.

None of Welsh rugby's six previous caretaker-coaches - who include current forwards coach Robin McBryde - have to date been offered the role on a permanent basis.

And if 42-year-old Howley wishes to be in the running to succeed Gatland after the 2015 World Cup, his record this autumn and during Wales' 2013 Six Nations defence will be crucial, particularly as prior to joining Wales in 2008, his experience was limited to being Cardiff Blues' backs coach.

Howley will need little reminding of his own downfall at Samoa's hands at the 1999 World Cup as the islanders beat Wales in Cardiff.

He was captain and scrum-half in 1999, partnered at half-back by another of Wales' current backroom team - kicking coach Neil Jenkins.

Wales dominated up front against Samoa, but offered Pat Lam's side a chance to make their mark by offering themselves as tackling practice and suffered the consequences.

Fast-forward to November 10, 2012 and Wales seemed to be at it again by playing as their opponents must have hoped they would.

Wales tried to outmuscle rather than outwit the Pumas, sending attackers straight at defenders or passing the ball along the line to well-marked wings without first attempting to create space.

Bafflingly, the hosts did not make a single line break and took play into Argentina's half only twice during the 80 minutes.

And yes, there were individual failings to pore over in the statistics - blind-side Josh Turnbull accounted for four of Wales' 19 missed tackles, prop debutant Aaron Jarvis and scrum-half Tavis Knoyle had two apiece in the total.

Howley admitted Wales looked "one-paced" as he revealed feelings ranging from disappointment to frustration and annoyance.

And you can well understand his point. Players who had won the Grand Slam in 2012 and gone on to give Australia a run for their money in June lacked the collective will and creative nous to quell Argentina's predictably stubborn efforts.

For defence coach Shaun Edwards, the setback highlighted the gulf in peformance levels between injured Slam winners such as Dan Lydiate, Adam Jones, Jonathan Davies and - during the match - Jamie Roberts, and the players who filled their places.

Welsh rugby history can tell its own lesson. In 1995, a year after securing the then Five Nations title, coach Alan Davies was sacked after a tournament whitewash.

The fact that Davies was without an entire first-choice three-quarter line because of injury made not an iota of difference to his fate.

Australian Alex Evans was plucked from his job as Cardiff coach to take charge of Wales at the 1995 World Cup - and he lasted no longer than that after an unhappy campaign in South Africa ended at the pool stage following defeat by Ireland.

Howley has now overtaken Evans as the interim or caretaker coach with more Wales games to look back on than any other. Wales won only once under Evans, losing their three other games.

Howley's sole win came against the Barbarians in June, his first outing in charge, rapidly followed by three defeats against Australia down under and Saturday's loss to the Pumas.

But although Gatland will return to guide Wales through their 24 November clash against World Cup holders New Zealand and the revenge mission against the Wallabies a week later, Howley is very much the man on whose shoulders falls the greatest weight this season.

Wales need a winning boost before the All Blacks and Australia turn up at the Millennium Stadium, with 2015 World Cup seedings to be determined in December.

And if Howley wants a better record heading into the 2013 Six Nations, only a win over Samoa can provide it.