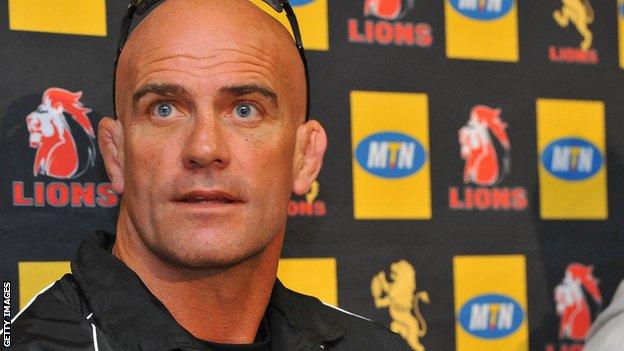 John Mitchell's future with Sale could be in doubt after he stated he now sees his future at Golden Lions.

The 48-year-old has been working at Sale on a consultancy basis whilst he contested misconduct charges, which he has now been cleared of.

"I want my head coach position back at the Lions," said Mitchell in a statement via his management company.

"There is some unfinished business to do with the Lions. I am determined that my future will be in South Africa."

It was rumoured he would become the Sharks' new director of rugby following Bryan Redpath's move to head coach, but instead chief executive Steve Diamond took control of first-team affairs until the end of the season.

Mitchell though was appointed to club's new Rugby Management Strategy board, which is chaired by owner Brian Kennedy alongside co-owner Ian Blackhurst, with Diamond, Redpath and Mitchell looking to shape the club's long-term future.

Diamond had previously stated that he expected the former All Black head coach to join the club at the start of November, and last week it was reported that Mitchell had agreed a full-time position at the Salford City Stadium.

The Sharks, who refused to comment on the matter when contacted, won their first Premiership game of the season on Friday night with Diamond back in charge beating London Irish 21-9.

Speaking after the game, Diamond told BBC Radio Manchester: "We can't take anything for granted, we've got a fight on our hands until the end of April and May.

"It won't be sorted out by Christmas this as all the other sides are good teams.

"London Welsh, who were going to be a laughing stock to everybody, have proved that they're highly competitive.

"We need to get eight our nine wins this year to maintain we stay in the competition."