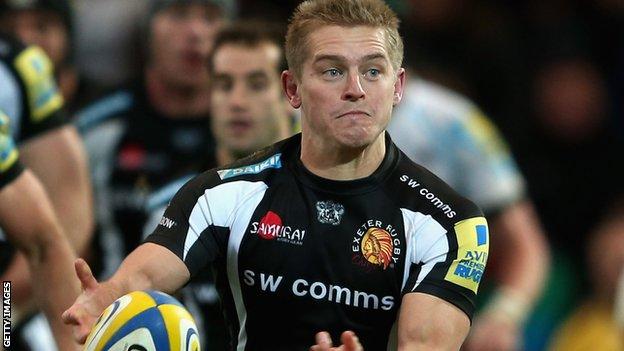 Steenson kicked 16 points as the Chiefs ended a run of three successive losses.

"Credit where it's due, we pretty much got reward for every bit of pressure we created with the way Gareth kicked," Baxter told BBC Radio Devon.

"When we created pressure and got those penalties we knocked the points over and built a nice cushion for us."

The victory lifted Exeter up to sixth in the Premiership, five points off third place, and 10 clear of bottom side Sale.

But Baxter says he is focused on the sides above him, rather than below.

"It's not so much about looking down, it's about what we can do when we're looking up," he added.

"We've pushed ourselves into the area of the table where we can attack the rest of the season.

"We've got a nice foundation, we're a little bit ahead of where we were last year.

"But a large part of that is about how we play, how we go after games, the ambition we show, and the quality of the little things we do."