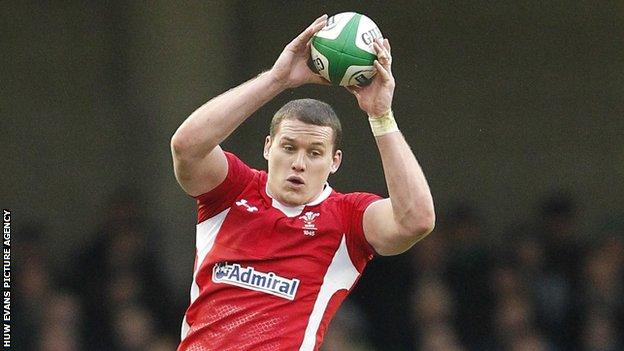 Ospreys lock Ian Evans says he is "hungry" to break back into the Wales side for the autumn series after missing all three summer Tests in Australia.

Evans's hopes of a place in Australia were dashed by his wedding in June.

The way was left open for Bradley Davies, Alun Wyn Jones and Luke Charteris to fight out the lock places.

It was unfortunate timing. From my personal point of view I wasn't involved in international rugby when I booked my wedding

"I really want to get the jersey back and to try and keep it as long as I can," admitted 23-cap Evans.

"It's always frustrating whenever you don't play for your country.

"Frustrations can make you more hungry to get the jersey back."

Evans was an ever-present member of Wales' 2012 Grand Slam-winning side and played in the pre-tour match against the Barbarians at the Millennium Stadium.

But he did not figure at all in the Test series down under which Wales lost 3-0, appearing only as a replacement against ACT Brumbies.

He admitted his wedding to his then-fiancee Angharad was planned at a time when his name was not in the frame for Wales.

"It was unfortunate timing. From my personal point of view, I wasn't involved in international rugby when I booked my wedding," he said.

"Rugby took a u-turn in the right direction for me and it was just one of those unfortunate things.

"That's just life really and you have just got to take it."

Evans, 28, is confident his form is good enough to allow a return to the international stage.

"Competition is fierce and we are lucky we have an abundance of second rows. I am quite happy with my form going into this autumn series," he added.

"So I'm more than confident within my ability. Previously, I was injured and not really getting a string of games together. It was a lot different from where I am now. I am confident where I am and happy with it.

"Argentina will be a lot tougher [now they are in the Rugby Championship]. They are getting quality rugby games. It's going to be a tougher challenge."

The Wales team management are due to name their team to face the Pumas on Tuesday at 13:00 GMT.