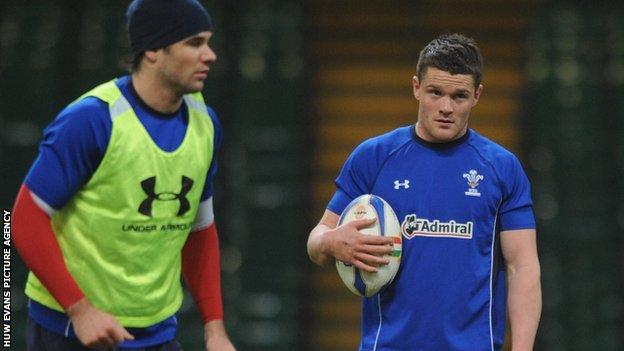 In the back row Josh Turnbull comes in as Ryan Jones (shoulder) and Dan Lydiate (ankle) are also out.

Scott Williams takes over from fellow Scarlet Jonathan Davies (groin) at outside centre.

Bayonne's Phillips, 30, and with 68 caps and a British and Irish Lions tour to South Africa on his CV, is on the bench as Knoyle, 22, looks forward to his eighth Wales appearance.

Howley said: "One or two injuries have forced our hands in certain areas in terms of selection, but the fact that we are still able to field a side packed with Grand Slam experience shows that we have been able to develop some depth in recent years.

"There are obvious opportunities for the likes of Aaron, Tavis at scrum-half and Josh in the back row, to pull on the jersey against Argentina and try to make it their own.

"We all know how important a good start against the Pumas will be to our November series; they arrive battle-hardened after a tough Rugby Championship campaign.

"They will be looking to silence the Millennium Stadium crowd from the outset and we know we can't afford to let that happen, with a successful campaign this autumn vital to our ambitions for the future."

Exeter-born Jarvis, who qualifies for Wales via his Merthyr Tydfil-born grandmother, has his chance after joining the Ospreys from Bath ahead of the 2011-12 season.

He gets the first chance to shine in the absence of Adam Jones ahead of uncapped 20-year-old Scarlet Samson Lee, experienced Bath prop Paul James, and Cardiff Blue Scott Andrews.

James, 30, is on the bench however along with another loose-head, Osprey Ryan Bevington, indicating the former is lined up to take over from Jarvis at some point against the Pumas' renowned scrum.

Turnbull, 24, wins his fifth cap, having been given the nod ahead of Scarlets team-mates Rob McCusker and Aaron Shingler in the absence of Lydiate and Ryan Jones.

There are obvious opportunities for the likes of Aaron, Tavis at scrum-half and Josh in the back row

Howley also resisted the temptation to partner skipper Sam Warburton with Ospreys rival Justin Tipuric on the flanks. Six-cap Tipuric, 23, is on the bench.

Blues lock Bradley Davies is also ruled out along with Ospreys centre Ashley Beck, who has an on-going hip problem.

On this occasion they are also without Perpignan lock Luke Charteris, whose release for the 1 December clash against Australia has been secured against his availability for the French club when they face Biarritz while Wales take on the Pumas.

Overall, there are four changes to the Wales team that won the 2012 Grand Slam and seven changes to the starting line-up that lost to Australia in June.

Jarvis, Turnbull, Knoyle and Scott Williams are the incoming players from the 16-9 win over France that sealed the Six Nations crown.

Wales were whitewashed 3-0 on tour down under and lock Alun Wyn Jones hopes that can motivate Wales as they begin an autumn series that includes Tests against Samoa, New Zealand and the Wallabies.

Blues centre Jamie Roberts missed the tour to Australia and returns alongside number eight Toby Faletau and lock Ian Evans, while Jarvis is the newcomer.

Beck and Ryan Jones are expected to be fit for Wales' next Test against Samoa on Friday, 16 November.

Permanent Wales coach Warren Gatland's job as coach of the 2013 British and Irish Lions to Australia means his Wales role has been curtailed to Wales' biggest autumn games.

That gives Howley the chance to continue the caretaker role he first undertook in June, following a domestic accident in which Gatland badly injured his heels, as he guides Wales against Argentina and Samoa.

Gatland made it to Australia for the Wales tour, but in an advisory capacity to Howley, who will also coach Wales in the New Zealander's Lions absence during the 2013 Six Nations.