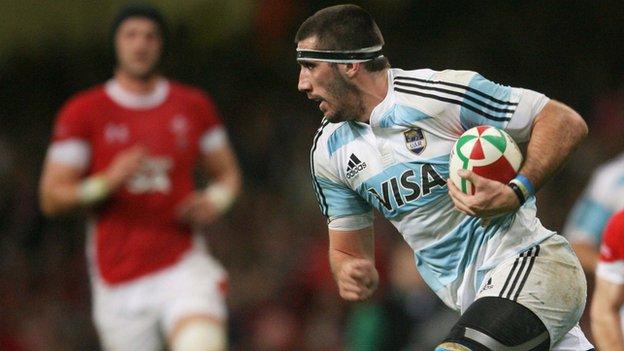 Argentina captain Juan Martin Fernandez Lobbe fears an "incredibly good" Wales side ahead of their clash at the Millennium Stadium.

The Pumas face the Grand Slam champions on Saturday in the first of Wales's four-game autumn Test series.

"It is going to be a very tough challenge," said Lobbe, who has lost three in a row against Wales.

"Wales are an incredibly good team, full of good players in all positions and with a lot of established players."

Wales are an incredibly good team, full of good players in all positions and with a lot of established players

Argentina arrive in the Welsh capital on the back of their inaugural season in the Rugby Championship, playing New Zealand, Australia and South Africa.

The Pumas finished bottom of the table and did not manage a victory but did record a 16-16 draw with South Africa in Mendoza and narrowly lost 23-19 to the Wallabies in Australia.

Lobbe, who will win his 50th cap in Cardiff, is confident the exposure Argentina have had to three of the best teams in world rugby will only be a benefit against Wales.

"To play against the first, second and third best teams in the world is great competition for us and we tried to take advantage of that," said Lobbe.

"But we have to keep on improving and use all of that experience on Saturday against Wales."

Wales have only been beaten once by Argentina in Cardiff, when they lost 30-16 in 2001, and have won the last three games at the Millennium Stadium between the two countries.

The Pumas number eight, who plays for Top 14 leaders Toulon in France, admits he is wary of a Wales side which pushed Australia all the way in the summer, despite losing the Test series 3-0 to the Wallabies.

"We saw the way Wales played in June and how close it was against the Australian team, and it is always tough to come to the Millennium [Stadium]," he added.

"It's a great place for rugby, and a great city which is very passionate about their team. It's going to be a great challenge and we have to work very hard to make sure we are up their for the task."

Lobbe admits that the loss of fellow Pumas warrior and Toulouse lock Patricio Albacete, who has picked up a major facial injury, is a major blow for the visitors.

"He is a world class second row, who has been up there for a few years now, but rugby is about 15 to 22 players and everybody will try to replace such an important player."