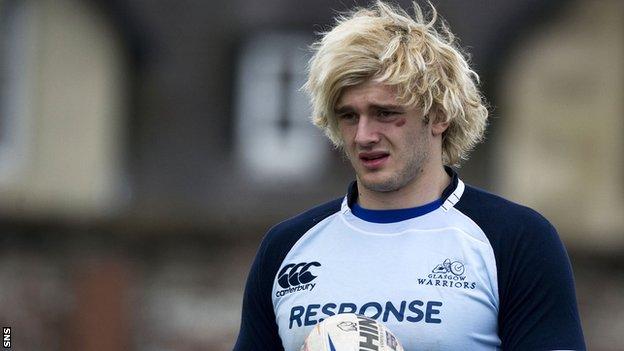 Richie Gray has passed a fitness test on an ankle injury after being provisionally named in the Scotland side to face New Zealand on Sunday.

The Sale Sharks lock will join Jim Hamilton in the second row, meaning Al Kellock remains on the bench.

New skipper Kelly Brown will win his 50th cap and is joined in the back row by Al Strokosch and Ross Rennie.

Visser, who qualifies under residency rules, played twice on Scotland's successful summer tour, scoring two tries on his debut in a 37-25 win against Fiji and also featuring in the win against Samoa.

Grant, former captain Ross Ford and Cross make up the front row, with Blair and Greig Laidlaw combining at half-back.

Laidlaw will have Edinburgh club-mates Scott and De Luca outside him in midfield, with Glasgow duo Sean Lamont and Stuart Hogg starting on the wing and at full-back, respectively.

Uncapped Glasgow scrum-half Henry Pyrgos is among the replacements.

Dave Denton, Scotland's stand-out performer in this year's Six Nations, has to make do with a place on the bench, while Glasgow flanker John Barclay misses out altogether.

Euan Murray is not available because the prop refuses to play on Sundays on religious grounds.

"Richie has trained fully with us this afternoon and is in good spirits," said Robinson. "He is raring to go for Sunday's match.

"For our first game of the season, we will really need to start well and keep the game simple.

"New Zealand are the world champions and they perform the basic skills well under the highest pressure.

"We need to step up from the summer tour and be ready to go toe-to-toe in a physical contest, just as Australia did most recently against New Zealand in Brisbane."