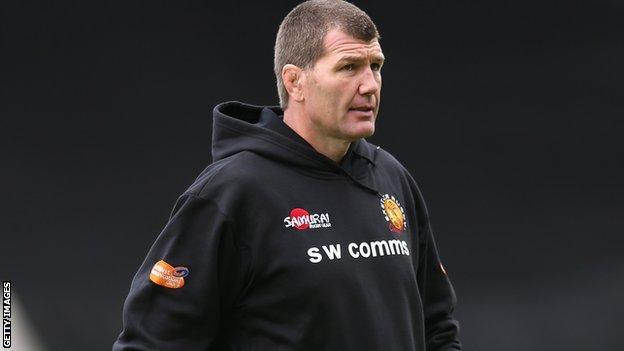 Exeter Chiefs head coach Rob Baxter says the upcoming round of LV= Cup fixtures is a chance for some of his fringe players to impress him.

Baxter is likely to rest a number of his first-choice side for the matches against London Welsh and Ospreys.

"The LV= is going to be exciting for us and is a great opportunity for those players," Baxter told BBC Radio Devon.

"I hope they do look on it as an opportunity because there's a number of them that are pushing very hard."

Exeter go into the matches following a after coming through their first ever fixtures in the Heineken Cup.

"Guys like Ben Moon, Chris Budgen and Neil Clark are going to have opportunities to push their claim, as are some of our younger academy guys who, the reality is, we want to see in a first-team shirt, and see what they can do," added Baxter.

"I'm really excited about how someone like Dave Ewers goes from the start in an important first-team game.

" has been on the fringes of the squad for a quite a while now and there's a fantastic opportunity for him.

"We're in a great position now, we've had a good run of Premiership results, we've had a nice time in Europe and we can give any bumps and bruises a bit of time to freshen up now for the guys not involved in the LV= Cup or away with international sides."