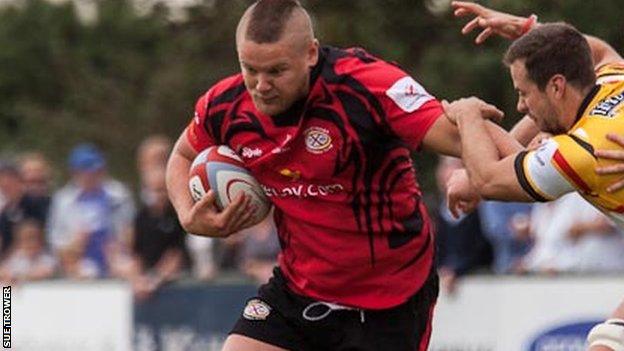 Bristol bounced back from heavy defeat at Nottingham with a comfortable 39-16 home victory over Jersey.

Jersey centre Ashley Maggs was sent off for a dangerous tackle before two tries from replacement Rhys Lawrence and Sambucetti's second extended the lead.

Richard Barrington touched down in stoppage time for the islanders but it was too little too late.

The home side would have been out of sight much earlier on had fly-half Adrian Jarvis been more accurate with the boot.

Making his first competitive appearance since joining in the summer, Jarvis had already missed two penalties before Le Bourgeois found the range to give Jersey the lead.

Bristol looked more dangerous though and full-back Jack Tovey soon found winger Watkins, who sprinted over in the corner.

Pennycook and Argentine Sambucetti powered in for a try each to increase the lead as the islanders let their discipline slip.

Dave Felton and Guy Thompson were both sin-binned and former Bristol academy player Maggs was red-carded, leaving the visitors facing an uphill battle.

Lawrence exposed a stretched Jersey defence, coming on from the bench to score twice either side of Sambucetti's second.

Deep in stoppage time Richard Barrington barged his way through to score between the posts to allow Jersey to end a difficult game on a positive note.

"We should be proud of our efforts, playing at this level, and playing against Bristol is a wonderful accomplishment."

The islanders remain next-to-bottom of the Championship, level on points but one place above Doncaster because they have won a game more than the Yorkshire side.

The win, meanwhile, put Bristol back in eighth spot after briefly dropping to ninth earlier in the weekend.