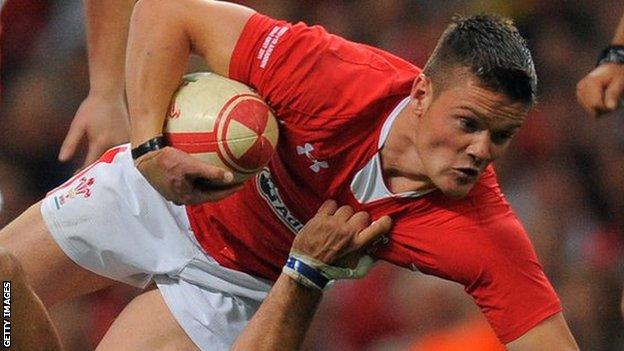 Wales scrum-half Tavis Knoyle says his selection for the opening autumn international against Argentina is proof that hard work pays off.

The 22-year-old has been selected ahead of Bayonne's Mike Phillips, who has to settle for a place on the bench.

The Scarlets number nine missed much of last season with a serious shoulder injury.

"Coming back from a nasty injury is not very nice... but hard work pays off," he said.

Knoyle's last appearance for Wales was as a replacement in the 24-18 defeat against Australia on 3 December 2011.

However he had surgery on an injured shoulder in January and was restricted to two appearances as a replacement for the Scarlets late in the season.

"I came back from a nasty injury and it's not easy when you're on your own coming back after a nasty shoulder op," said Knoyle.

"You just stay positive and keep working hard and time will tell."

The 22-year-old Glynneath RFC product will win his eighth Welsh cap against Argentina, but is not making predictions about claiming any more during the autumn series.

"I'm taking it day by day to be honest with you," Knoyle added.

"I'll just try and get everything right and prepare for that game and whatever happens then, happens."

Knoyle is expecting Argentina to present a tough challenge on Saturday, especially after a summer spent locking horns with Australia, South Africa and New Zealand in the inaugural Rugby Championship.

The Pumas finished bottom of the table and did not manage a victory but did record a 16-16 draw with South Africa in Mendoza and narrowly lost 23-19 to the Wallabies in Australia.

"Argentina have been performing well in the Championship, which I watched a bit of," he said

"They're going to try to get that big pack of forwards going and they will try and run us off the field.

"But I can't see that happening because our pack won't let them. The the boys are in great physical condition."