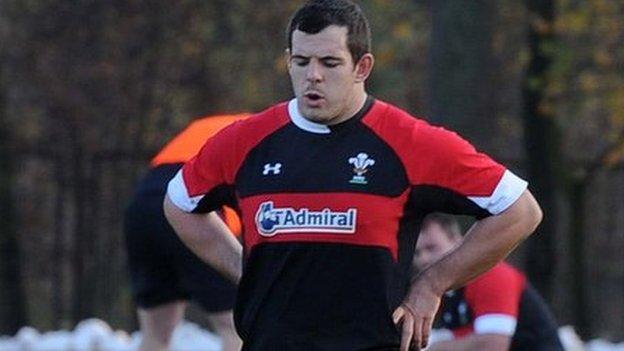 Ospreys prop Aaron Jarvis admits he has big boots to fill when he replaces Adam Jones as tight-head prop in the Wales front row.

Jarvis will make his international debut against Argentina at the Millennium Stadium on Saturday.

He replaces Jones, who has been ruled out of the autumn series with a knee injury.

"His are big boots to fill but hopefully I can do him justice," said Jarvis.

"I have had loads of help from him and he is really helpful and is willing to sit down and chat."

Exeter-born Jarvis, who qualifies for Wales through a Welsh grandmother, is one of seven changes in the Wales side which lost 20-19 to Australia in Sydney last June.

The 26-year-old, who signed for the Ospreys from Bath in 2011, impressed the Wales coaching staff during last week's training camp in Poland.

He was selected ahead of Scott Andrews of Cardiff Blues and Scarlets' Samson Lee and joins former Wales captain and hooker Matthew Rees and Gethin Jenkins in the Wales front row.

Jarvis, who was also eligible to play for England, admits the opportunity of playing Test rugby for Wales was behind his decision to leave the West Country for Swansea.

"I knew if I worked hard, anything could happen," said Jarvis.

"When I first signed for the Ospreys, it came to the forefront of my mind. I knew if I worked hard and kept going I knew this was a possibility as a long-term goal.

"I am just really excited about putting the shirt on and playing at the Millennium [Stadium] because the atmosphere there is fantastic."

Jarvis expects a baptism of fire as Wales take on renowned scrummagers Argentina, but he is determined to enjoy his debut.

"I am really happy and excited about the prospect of playing Argentina on the weekend," he added.

"I just cannot wait to get started. I think it will be very emotional and I am really looking forward to it."