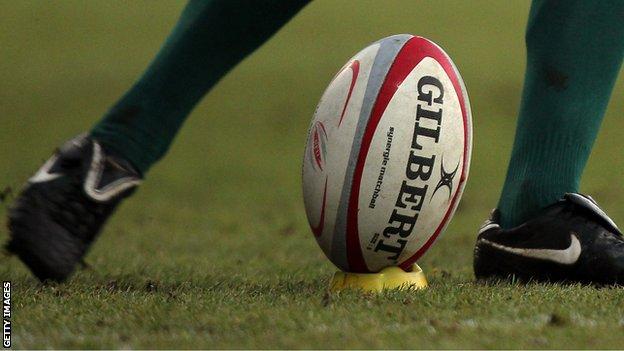 Bristol chairman Chris Booy has admitted he is worried by the Championship club's current form.

Liam Middleton's side, who were play-off semi-finalists last term, conceded nine tries in their 63-7 defeat by Nottingham on Sunday.

They now sit eighth in the table with just three wins all season.

Booy told BBC Radio Bristol: "We have to be concerned - the performance [on Sunday] was not acceptable. We should be doing so much better."

Their defeat at Meadow Lane came a week after a 23-13 victory over Bedford, who were previously unbeaten in the league.

He's under pressure, the same as I am - we are responsible for this club.

"It goes from the sublime to the ridiculous," Booy continued. "We had our best game in two seasons at Bedford and then we capitulate seven days later."

The former Premiership club have been absent from the top flight since their relegation in the 2008-09 season.

Since then, they have finished top of the Championship table on two occasions, but have failed to make it through the play-offs.

Middleton was praised for turning round their fortunes last term, but Booy admits the Zimbabwean is now under scrutiny because of their inconsistent form.

"He's under pressure, the same as I am - we are responsible for this club," Booy added.

"The club has to get some results. We cannot afford to keep losing. We are massively under-achieving with the investment we've made.

"We are confident we can put this right but we've got a lot of work to do."