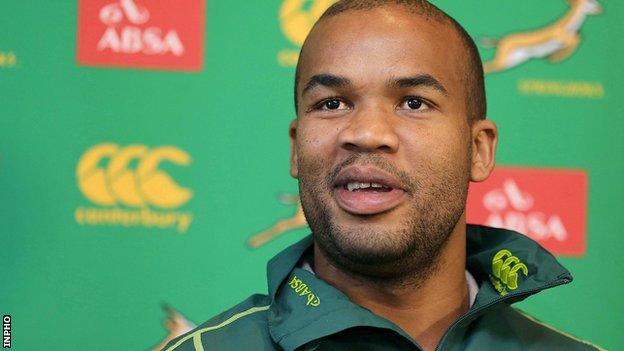 Ireland wing Andrew Trimble is hoping that South Africa star JP Pietersen will be only too aware of his abilities after Saturday's Test in Dublin.

Pietersen struggled when asked to talk about the opposition backs on Tuesday and suggested that France's David Skrela could be in the Ireland team.

"I'll have to make sure he knows my name by the end of the match," said Ulster star Trimble.

"[However] it's not something I'd use for motivation."

"It was probably only a mistake. I'm guessing we watch a lot more of the Rugby Championship than they do the Six Nations."

Ireland have won three of their last four matches against South Africa and only went down by two points at Aviva Stadium two years ago.

But they enter Saturday's clash on the back of four successive defeats, the most recent of which was a 60-0 rout by New Zealand in Hamilton.

A week earlier, the second game of the three-Test series saw Ireland edged 22-19 before the All Blacks went on to secure a whitewash.

"It was a massive disappointment after the tour. It's not a tour that any one of us is proud to have been on," Trimble said.

"There's frustration at getting beaten so badly. It's a long time waiting to put things right."

Trimble says that the lack of consistency in Ireland's level of performance is a mystery even to the players in Declan Kidney's squad.

"We were very close to beating the All Blacks in the second Test. It would be weak-minded if we looked back and said we're just not that good.

"Looking at it logically, we've produced big performances over the last few years and we know that if we do that we'll get big results."