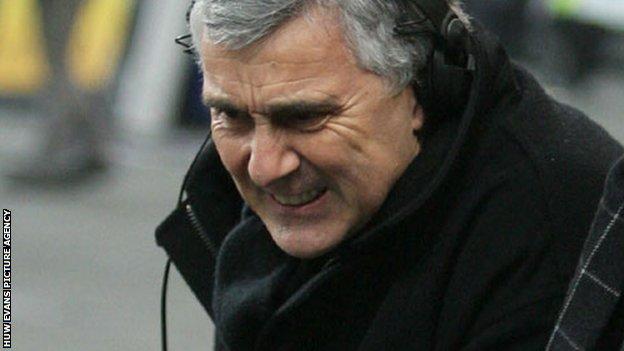 Gareth Davies has called on Welsh rugby to follow the example of Ryder Cup Wales to help the domestic game out of its current crisis.

The former Cardiff RFC chief executive questioned whether the game in Wales had ever been marketed properly.

He suggested the model that brought golf's Ryder Cup to the Celtic Manor in 2010 had shown rugby the way to go.

"It's got to be a sort of Wales plc effort. We showed it as a nation on the Ryder Cup," he said.

Davies was reacting to the publication of the findings of a long-awaited report into Welsh rugby's regions, which says they might not all survive their financial plight and criticises "poor management", although the regions were also praised for steps taken to address the funding gap.

Accountants PriceWaterhouseCoopers assessed the regions' finances up to April 2012 and highlighted options for the future. A copy of the report was obtained by the BBC and published on Wednesday.

The former Wales captain told Radio Wales: "I just wonder at times if we ever have got together to market the game.

"You've got 60 or 70 thousand people at any home international at the Millennium Stadium. Where do they go to the following Saturday? Certainly not to watch rugby.

"We are playing against the top teams in Europe. Toulon were in Cardiff only two weeks ago and there were barely 7-8,000 people at the Arms Park.

"If Toulon were in Leicester or in Northampton there would have been 20,000 people there."

Davies suggested that the role of the benefactors who have backed the Welsh regions had been important and could not be discounted.

He claimed it was their tendency to act in competition with each other and an historically antagonistic relationship with the governing body which was at the root of many of the problems facing the game.

"There has been this disconnect between the governing body and the regions and in some ways that is the main conclusion if you like or the main recommendation of the report is there has to be a getting together with the governing body," said Davies.

"It's something Wales can do. We showed it as a nation on the Ryder Cup. Whoever would have thought back in the 1990s that Wales would ever host the Ryder Cup?" he asked.

The growing financial muscle of English and French clubs makes it imperative that the people running the game in Wales find unity and act quickly, according to Davies.

"It's not only regions or clubs before them falling out with union, it's actually the regions falling out with themselves and almost creating a market internally within Wales itself which we can't afford.

"What's happened by now, of course, is that that market has grown and you've got the strong financial influences of France and England that are rendering our game more and more untenable, unless we get our systems in place."