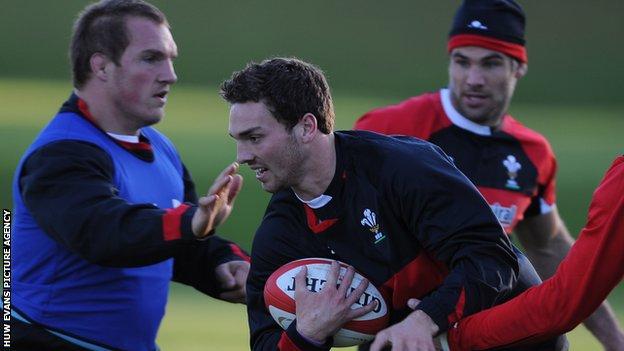 Legendary fly-half Barry John has predicted a "tough month" for Wales in their autumn series against Argentina, Samoa, New Zealand and Australia.

The ex-British and Irish Lions star has particular concern over the ability of the half-backs to control the game.

"The half-backs are a problem. I don't think they're good enough.

"I don't think Mike Phillips is playing well in France. I think he's lost a bit of self-confidence and even interest."

Phillips, who has made the scrum-half position his own in recent seasons, has dropped to the bench for Saturday's series opener against Argentina at Cardiff's Millennium Stadium.

Tavis Knoyle steps up to make only his third start, forming a new half-back pairing for Wales alongside Scarlets team-mate Rhys Priestland.

Priestland's regional form has been called into question, and he was blamed in June as Wales twice failed to protect winning positions against Australia.

The 25-year-old feels much of the recent criticism of his play has been unwarranted, focusing solely on his missed kicks at goal while ignoring his general play.

"Obviously I'd like to play a bit better but you can't be on top of your game all the time," said Priestland, whose kicking success rate in the Pro12 this season has dropped to 45%.

"I've had a few injuries. I've tried to work through them the best I can.

"I haven't been setting the world on fire but my form hasn't been as terrible as everyone had made out.

"You miss a few kicks and everyone thinks you've had an absolute shocker but they don't take into account anything else."

Dan Biggar's return to the squad after missing the summer tour to Australia had raised doubts over Priestland's place at fly-half, a position he has made his own over the past year.

Wales caretaker coach Rob Howley revealed this week that the fly-half selection had "caused a debate", but said that Priestland's "decision-making" remained a key factor.

John, though, feels Grand Slam champions Wales lack a fly-half who can "control the game and shake it up".

He also fears a positive start to the series will be ruined by a battle-hardened Argentina side that competed well against New Zealand, South Africa and Australia in the inaugural Rugby Championship.

"Argentina are up there with the top boys now," said John.

"Like they say in boxing, they've been in with the big boys. Their preparations have been better than Wales'. That's going to be a tough game, and so will Samoa."

"It's going to be a very tough month."