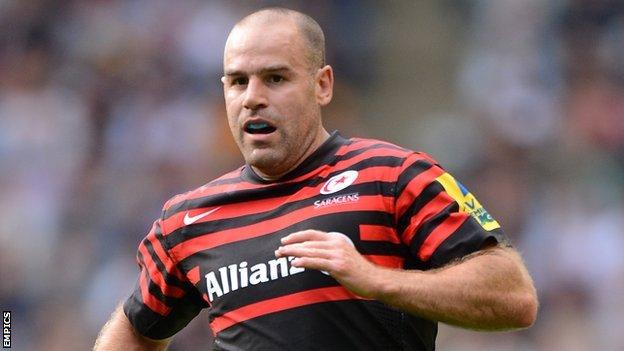 Saracens fly-half Charlie Hodgson has had surgery on a fractured cheek bone and will be out for around six weeks.

The 31-year-old suffered the injury in the latter stages of Sunday's Premiership game against Wasps, in which he contributed 21 points in

The former England international has been in impressive form this term.

He has scored 130 points - including 32 penalties and 12 conversions - in his 10 appearances this season.

Saracens, second in the Premiership, are without fly-half options Owen Farrell and Alex Goode for the next four weeks, as they are both on England duty.

Director of rugby Mark McCall will most likely turn to Nils Mordt, who has made two replacement appearances this season, and 20-year-old Sam Stanley to fill the number 10 berth.

Scrum-half Richard Wigglesworth is also an option at fly-half having featured in the position in the past.

If Hodgson is out for the full six-week period he will miss Premiership matches away at Worcester and at home to Gloucester aswell as back-to-back Heineken Cup clashes with Munster in December.