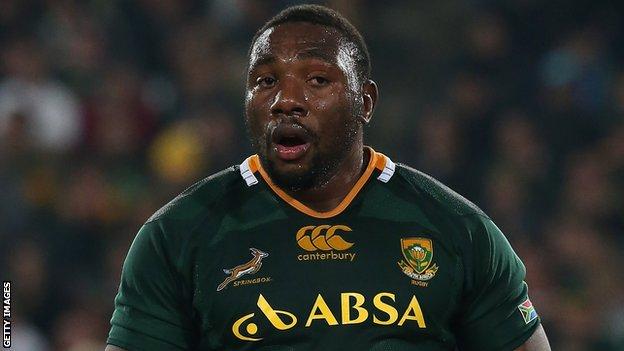 Prop Tendai Mtawarira has been forced to withdraw from South Africa's game against Ireland on Saturday after suffering heart palpitations.

Mtawarira suffered a recurrence of the ailment which has troubled him previously and was taken to hospital in Dublin although he was later released.

Current Leinster player Heinke van der Merwe has been called up to the replacements for the Dublin game.

It's not yet clear whether Mtawarira, who suffered the heart palpitations early on Saturday, will remain with the Springboks squad for the remainder of the current tour.

Van der Linde has played 73 times for the Springboks while Van der Merwe, who was called into the squad earlier this week, played in one previous Test in 2007.

Springboks vice-captain Adriaan Strauss will start at hooker, with Schalk Brits on the bench on his return to Test rugby.

The changes are enforced because of injuries, with Johan Goosen, Bryan Habana and Andries Bekker unavailable among a string of absentees.

Ulster scrum-half Ruan Pienaar will start for the Springboks, as does Bath flanker Francois Louw.

Richardt Strauss, 26, joined Leinster as a 23-year-old after playing for the Cheetahs against the 2009 British and Irish Lions.

He has since played a major role in the Dublin province's last two Heineken Cup victories in 2011 and 2012.

Strong performances for his adopted country during the autumn internationals and Six Nations could put him in contention for a place on next year's Lions tour to Australia.