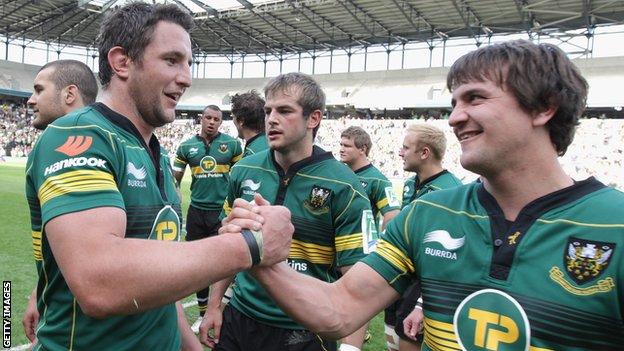 Northampton Saints' Jim Mallinder says it is "very frustrating" that Lee Dickson missed the East Midlands derby and will not play for England either.

Dickson was left out of the first autumn international against Fiji, along with club-mate Phil Dowson.

Mallinder told BBC Northampton: "I'm sure Lee will set out to prove the England selectors have got it wrong.

"You don't mind players missing if they're in the team or 23, but when he's not involved, it's disappointing."

He continued: "Phil was disappointed last week that he wasn't in the 23 and I think Lee will probably be even more disappointed."

Saints play Harlequins in the LV= Cup this weekend and Mallinder confirmed: "It's very frustrating, but Lee won't be involved with us this weekend - we'll give him a bit of time off."

However, the Saints director of rugby acknowledged that England's head coach does keep the club updated on their players.

"Stuart Lancaster is very good at making everyone aware of whats going on," Mallinder added.

"It doesn't help Lee Dickson or Northampton Saints but England and Stuart are very good at having those conversations."