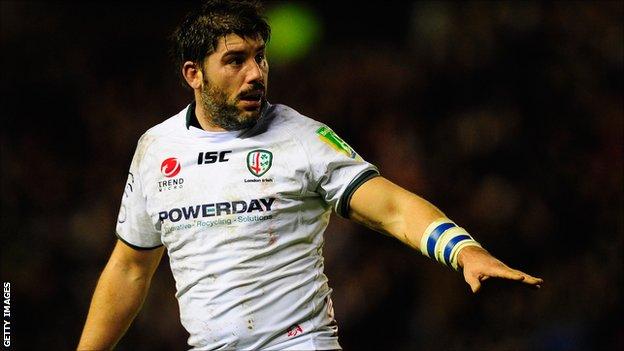 London Irish hooker Brian Blaney says the Exiles are targeting victory in this year's LV= Cup competition and says they are desperate to avenge last weekend's defeat by Sale.

Irish were beaten by the Sharks in the Premiership on Sunday, but Blaney says they must make up for the loss.

"We are going in to every cup to win silverware," Blaney told BBC Berkshire.

"We are going to field strong sides in every competition in the hope of getting our hands on some silverware."

Shane Geraghty will make his first start for Irish this weekend since his high-profile return from Brive over the summer.

There is a lot of pressure on me, but thank god I've got the experience to deal with that pressure

Injury has restricted Geraghty to a handful of cameo roles so far this season, but director of rugby Brian Smith will start him at centre on Sunday.

There will also be the first start of the season for England prop Alex Corbisiero, who is returning from injury along with Blaney.

And 30-year-old Blaney, who has not featured much this season, will also be a key player for Irish over the next few weeks with David Paice away with England and Scott Lawson with Scotland.

"It has been frustrating, but that is the game of rugby and that is the life of a professional sportsman," he said.

"I cannot remember my last full game so I'm looking forward to getting really fit and getting stuck in.

"There is a lot of pressure on me, but thank god I've got the experience to deal with that pressure. I know what I am capable of and I'll be doing all I can to help the team get some victories."

And the former Leinster player says the whole squad are relishing the chance to make up for last weekend's loss.

"We were very disappointed with last weekend, it was always going to be a difficult game," he said.

"We are disappointed not to get the losing bonus point after getting ourselves back in the game but the beauty of rugby is we have to chance top put things right, get back on the horse and get that win."