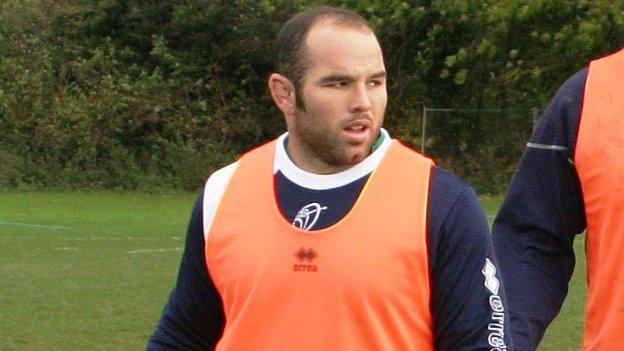 Nottingham have signed London Irish hooker Shaun Malton on loan until the end of the season.

Malton, who has only played one Premiership game since joining in the summer, will go straight into the squad for Friday's top-two Championship meeting with leaders Newcastle Falcons.

It makes competition for that hooker's position intense with Joe Duffey, Scott Wright and Ollie Taylor

The 22-year-old South African said: "It's always best to play the best.

"Games like this is how you get to see where you stand in the competition and see if your game is up to standard."

The former Sharks Under-21 Currie Cup captain, and young Springbok and South African schoolboys representative, added: "I've not seen a lot of Championship rugby but know it is forwards orientated, which I like, getting in smashing it up and getting aggressive.

"And from what I saw in the way we performed at the weekend [in the 63-7 win against Bristol], we can really play running rugby at the same time.

"There is a nice vibe in the camp, things are going great for Nottingham right now.

"I spent time with the boys over the weekend and they are a great bunch."

Coach Martin Haag said: "Shaun has fitted in great. He is the type of player we are looking for. He is match fit, got great skills and has a good character.

"It makes competition for that hooker's position really intense with Joe Duffey, Scott Wright and Ollie Taylor all there."