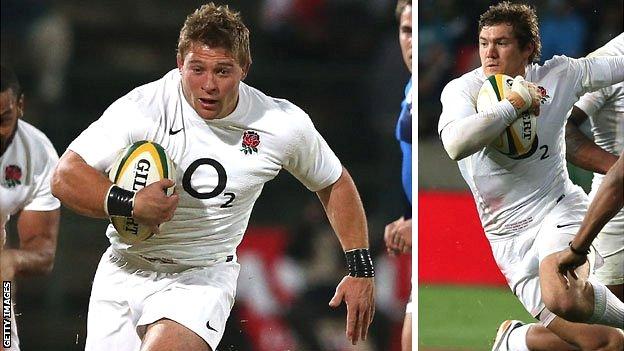 The Pacific Island side have a well deserved reputation for playing expansive rugby but England should run out convincing winners to set them up for matches against Australia, South Africa and New Zealand.

England have picked an inexperienced side with one debutant - Tom Youngs - in the starting XV and two more uncapped players in Joe Launchbury and Mako Vunipola on the bench.

I'll explain the thinking behind the England side and why they should be too good for the flying Fijians on Saturday at Twickenham.

What do you make of the England team?

Overall I'm pleased with the selection - it looks to have a good balance to it.

The biggest call is the selection of Youngs at hooker - I'll look at him in more detail below.

All the forwards are playing reasonably well at the moment and although I would have liked to have seen Steffon Armitage given an opportunity at open-side flanker, Tom Johnson, captain Chris Robshaw and Thomas Waldron will be OK against Fiji.

It's good to see young Launchbury included, the Wasps forward looks a good prospect and should be given some game time to find out if he's up to it.

The squad is relatively inexperienced in terms of caps but in each row of the team, from the front row to the back three, there is experience as well as players in good form.

With Dylan Hartley injured there's not a lot of choice at hooker for England, but even so it is brave to go with Youngs, who was a centre until three years ago and has only started 10 matches for club side Leicester - they clearly believe in him.

The biggest plus is that by picking Youngs it shows England are planning to expand their game-plan and try to play more attacking rugby.

England have gone for him because of his mobility and handling skills, and the next step for their development is clearly their attack, because they have to improve that if they are to have any hope of beating any of the big sides.

The biggest concern surrounding Youngs is his throwing at the line-out and the spotlight will be on him because he missed three throws against Gloucester in the last game he played.

However, his throwing success in the Premiership is 81%, compared to Hartley's 86%, so I don't think it will be too big an issue.

How should England play?

Against Fiji England have to get their set-piece to work effectively, and I would expect them to do so.

Fiji are renowned more for their off-the-cuff, free-flowing style play, rather than being solid at scrum and line-out time.

England should dominate the scrums but with Youngs coming in at hooker, the line-out could be a slight concern.

In England's half I would like to see coach Stuart Lancaster's men use the maul from line-outs, tie the Fijian forwards in and really grind them down and frustrate them so that they concede penalties.

What about England's half-back partnership?

Scrum-half Danny Care just needs to do what he's been doing for Harlequins all season, move the ball quickly from breakdowns and make the breaks when it's on.

He mustn't slip back into his old England habit of running across the field and eating up space for the backs.

This also has to be Toby Flood's time to take the 10 shirt all the way to the World Cup - the fly-half must start with a competent game, bossing the team and being the general of the field for England.

Is there an issue in the centres?

Brad Barritt and Manu Tuilagi will enjoy the physical confrontation. The problem is that neither is the best passer of the ball.

Having said that, Barritt hasn't played a bad game for England. He'll take the ball to the line well and he tackles absolutely everything.

If Jonathan Joseph was fit I think that would be the way to explore, with him at outside centre and Tuilagi at 12.

Tuilagi will become an unbelievable player, but I think he has to play inside centre.

Alex Goode has the ability to become first receiver and be a playmaker but I don't want to see him doing that if there's no-one else to cut the line further out in attack.

He has to weigh up when it's best to come in and best to stay out wide.

Against Northampton he came in as first receiver, spotted the overlap, stepped to fix the defence and then sent out a good pass before supporting on the inside to score the try.

That won't happen in every phase of play at international level but I believe he's a good enough footballer to know when to do it and when not to.

It's really unfortunate for Mike Brown - most people would say he doesn't deserve to be left out of the team.

But there's no doubt Goode has talent - he's a footballer, he can instinctively read and understand the game around him and intuitively play the game of rugby.

Verdict: England to win by about 15 points