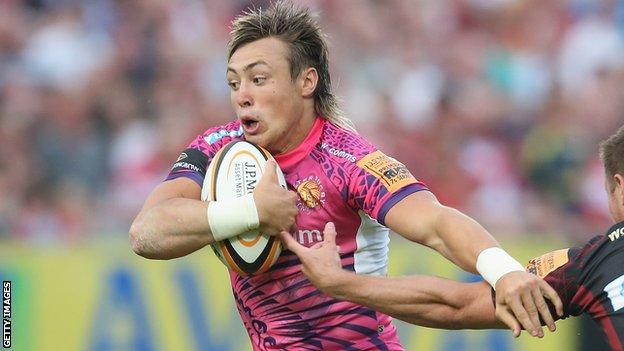 England Under-20s youngsters Henry Slade, Jack Nowell and Jack Arnott have been brought into the side.

And more senior players like Mark Foster, Junior Poluleuligaga and Neil Clark are also given a chance.

"The LV= Cup is important because it's an opportunity to play rugby for these guys," said Gibson.

"A lot of them haven't had as much rugby as they would have liked.

"Those senior players have to put in a solid performance, they've started well this week and led by example in training.

With many of Exeter's younger players who are dual-registered with Championship clubs having been recalled for the fixture, Gibson feels the match is the next step in their development.

"It's a big day for them. A lot of them have been playing Championship rugby and now it's an opportunity to wear an Exeter shirt and show what they've learned in those games," he said.

"The maturity that the players have shown this week in the build-up to it has been really encouraging.

"The Under-20s players, in particular, have really come through this week and started to show their maturity and experience."