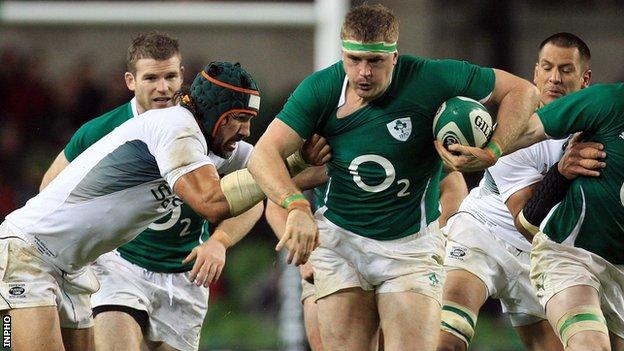 Heaslip will lead an injury-hit Ireland side as they aim to avenge the 2010 defeat by the Springboks in Dublin.

"South Africa are a confrontational side and they don't make any bones about that," said Heaslip.

"They try to run over you or through you with their forward pack and provide nice ball for their backs."

Heaslip added: "They got one over us last time and we don't like losing in our back garden.

"It will be a full house on Saturday and the place will be rocking. We want to give the Irish people something to cheer about."

Heaslip says he was "humbled" to be asked to lead the Irish by coach Declan Kidney after Brian O'Driscoll, Paul O'Connell and Rory Best were all ruled out by injury.

"I was in Baggott Street (in Dublin) getting my mate an engagement card when I got the heads up from Declan about it," Heaslip said.

"I was in Tesco and I didn't know what to do with myself. I felt like going out and celebrating. It felt like my first cap again.

"It's great. I rang my parents straight away. I'm proud to lead this group."

Despite the absence of so many experienced players, Heaslip insists that the Irish won't lack leadership in Saturday's contest.

"Once we get onto the pitch everyone will be on automatic pilot because we have such great leaders within the team.

"It's talking after the dinner that's got me more nervous than anything else."