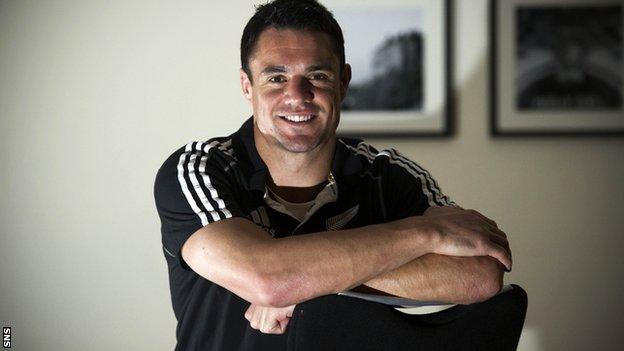 Dan Carter says New Zealand are itching to get back on track against Scotland after slipping up with a 18-18 draw with Australia in their last game.

The All Blacks had been seeking a record-equalling 17th-successive win.

"We were pretty disappointed in our last performance in Brisbane," said fly-half Carter.

"The tough thing is, after a performance like that, you want to play the following week and make amends. We've had to wait a couple of weeks."

But Carter says his side have not yet paid attention to the Scotland line-up, which was announced on Tuesday.

"This game, it's more about us," the 30-year-old explained. "We haven't looked at the opposition, Scotland, all that much this week.

"We're really wanting to focus on our performance so we walk off the pitch at the end of the 80 minutes and be really happy with the performance.

"When you look at it like that, it takes the opposition out of the equation.

"This weekend's another chance to really work on our game and put in a performance that we're going to be proud of."

Carter will assess his rivals - his opposite number is Edinburgh captain Greig Laidlaw - in the 48 hours before kick-off.

"I haven't even seen Scotland's starting line-up or who's playing this week," he said.

"I've got certain things that I want to get out of this game, more on a personal and team basis, than looking too much at the opponents."

Carter - the leading scorer in international rugby with 1360 points in 92 Tests - has not scored a try in two years since the last visit to Murrayfield.

Scotland lost that game 49-3 and Carter has played 15 Tests since.

"That would be nice," he said about the prospect of ending that barren run. "I didn't even realise that myself."

New Zealand, unbeaten in November Tests in Europe since 2002, are seeking to complete a calendar year unbeaten as they face Scotland, Italy, Wales and England on their European tour.

All Blacks coach Steven Hansen is also looking forward to making amends for the Australia game.

"If both teams go out and play to the best of their ability, it's going to be a cracker of a game," he said of the Murrayfield match.