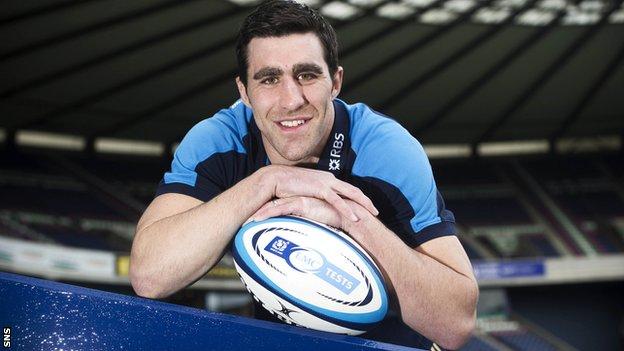 Kelly Brown will lead Scotland out on his first appearance as captain seeking to match the might of New Zealand.

"Any New Zealand side that takes to the pitch will be incredibly strong," the Saracens star told BBC Scotland.

"Yes, they have made a few changes but they probably have 50 top quality internationals to choose from.

"They are the world champions but it all comes down to 15 against 15. We want to perform to the best levels we can and make the nation proud."

Brown will win his 50th cap at Murrayfield on Sunday and hopes to be part of a first Scotland win over the All Blacks at the 29th attempt.

"The week has gone really well," added the 30-year-old. "It's a big challenge but one we are looking forward to.

"We always work incredibly hard before any Test and do all the analysis, so we know how they are going to play.

"It's up to us to impose ourselves on them."

Since Brown's international debut, Scotland have taken on the All Blacks four times, with the Scots scoring 19 points in total, to their opponents' 160.

The odds are stacked against the hosts, who claimed victories in Australia, Fiji and Samoa in June at the end of a torrid season that featured a group-stage exit from the World Cup and a Six Nations whitewash.

New Zealand's most recent loss came in August 2011 against Australia in their final match before the home World Cup which they won, while they have not been beaten on an end of year northern hemisphere tour since 2002.

The tourists are also seeking to erase the memory of their last Test, October's 18-18 draw with Australia, when they missed out on a record-equalling 17th successive win and failed to score a try for the first time in 105 fixtures.

Brown has been installed as captain after missing the Six Nations and the summer tour through injury.

And the number eight is enjoying his new role, although there has already been one occasion when he needed to raise his voice.

"A large part of captaincy is man management and realising what makes the guys fire," he explained.

"I've really been working on that, speaking to each of the guys individually and making sure they know their roles and what's expected of them.

"There's been one (incident involving shouting) in training on Thursday. It's not really my style but I felt it was needed.

"It was taken well and we move on. I'm expecting a big performance from that player on Sunday."