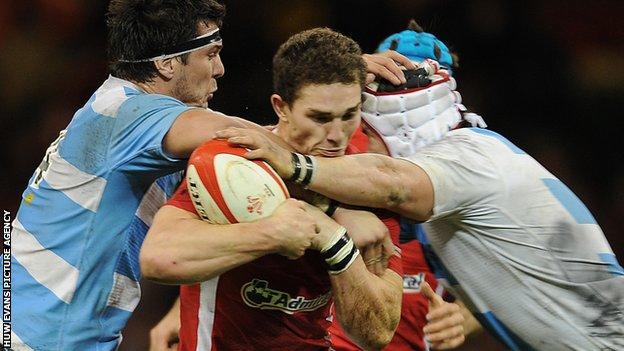 Wales were made to look lethargic in Saturday's 12-26 defeat by Argentina, according to interim coach Rob Howley.

The loss was compounded by injuries to Alun Wyn Jones (shoulder) and Jamie Roberts (concussion) that could end their involvement in the autumn series.

"I am disappointed, frustrated and annoyed because we know we are a better side than that," said Howley.

"We talked about it being an arm wrestle for 50 minutes and we were 12-6 ahead but we looked one-paced."

Argentina responded to a 9-6 half-time deficit with converted tries from wings Juan Imhoff and Gonzalo Camacho, giving them only their second win in Cardiff - 11 years to the day of their first.

Wales failed to make any line breaks, and forced their way into the Pums' 22 only twice during the whole 80 minutes.

"When you play Argentina, tempo, pace and intensity are important but there is no doubt their experience and exposure to the Rugby Championship has taken that Argentina side to another level," added Howley, who will also be in charge for Wales's next game against Samoa before Warren Gatland returns for the Tests with New Zealand and Australia.

"They played the All Blacks, South Africa and Australia over a six-week period and they have certainly learned from that and we were exposed to it today and we very much came second."

"Wales didn't show anything in attack, but their defending was good in the first half. However, second half Argentina cut them apart. With the injuries they got to key players, it's going to be a very tough month for Wales."

Lock Jones and centre Roberts left with injuries during the first half. Roberts was clearly concussed after a clash of heads with Gonzalo Tiesi, while Jones was withdrawn with a shoulder problem that appeared serious.

Howley said: "Jamie has a bump on the head, it's a mild concussion to say the least.

"Alun Wyn has done his AC (joint) so we will have to wait on the medical opinion for that but it does not look good at this time.

"It will test our strength in depth and these next three games are very important."

And assistant coach Shaun Edwards suggested Wales's options from the bench were exposed.

"I definitely thought the impact from the Argentina bench was better than ours.

"We went into the game with certain personnel missing and it showed quite dramatically in the last half hour.

"Both starting centres from the Grand Slam were missing, we had our number six and number three missing and it showed, and we have to get the other players up to pace as quickly as possible.

"But it was obvious there is a disparity at the moment between our first-choice XV and the players who have got those positions now."

"The intensity of the game was very high, but the Argentinian players have had a good experience playing in the Rugby Championship and have learned to play at this intensity," said Phelan.

"Today was a good step forward for our team in terms of intensity and tempo and scoring points, which was one of our major goals for this game."