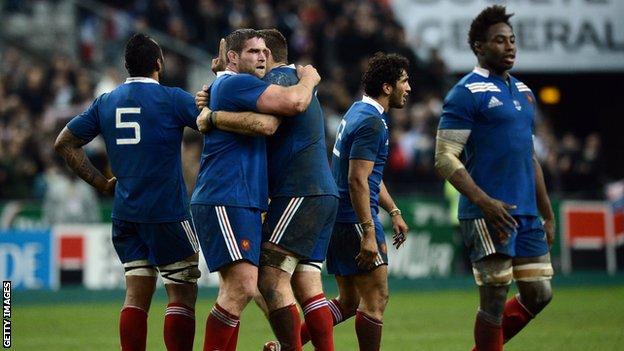 Impressive France beat Australia 33-6, ending a run of five defeats to the Wallabies in their opening autumn international in Paris.

Michalak extended the lead before the break, knocking over a penalty and a drop goal to make it 16-6.

Winger Wesley Fofana's try, and a penalty try put the game beyond doubt.

French rugby is a bit like that, when we're scared we can do great things

France were humbled 59-16 when the two sides met in 2010, but the memories of that were quickly forgotten as they thrashed Australia's scrum.

Under pressure 10 yards from their own line, the Wallabies' pack were exposed when Picamoles escaped off the back to charge over for France's opening try.

Adam Ashley-Cooper and David Dennis were both guilty of knocking on in good positions before the visitors got some reward with a second Harris penalty.

The home-side scored their second try with 57 minutes gone, when Michalak ran through a weak Wallabies defence to send Fofana over.

After another embarrassing scrum, France were awarded a penalty try which Michalak converted.

The 30-year-old fly-half, who was playing in only his third test in over two years, was the main protagonist for the win, converting all three tries and kicking two penalties and a drop goal to earn 15 points.

Australia thought they had gone over late on but Ashley-Cooper was denied by the television official, before Morgan Parra completed the rout with a late penalty.

Afterwards, France coach Philippe Saint-Andre praised his team: "I'm proud of the players. French rugby is a bit like that, when we're scared we can do great things.

"We had a revenge to take against Australia, We tried to be very combative, very aggressive in the ruck. I think that was the key."

Australian coach Robbie Deans said: "It was a very complete performance from the French, they were too good for us tonight."

Australia's next match is against England at Twickenham next weekend, with the French facing Argentina at the Stade de France.