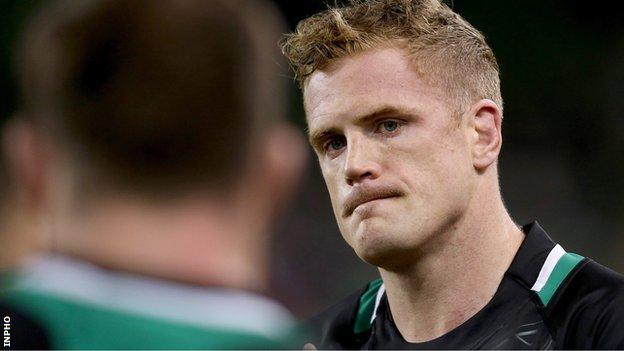 The Irish led 12-3 when Heaslip was yellow-carded in the 43rd minute for collapsing a driving maul as the Springboks attacked their line.

In his absence South Africa scored 10 points to take control of the contest.

"As captain I should lead by example, but being yellow-carded wasn't a good example," Heaslip said.

"I put my hand up straight away when we came in afterwards. I'm a better servant on the field than off it."

Heaslip was leading the Irish for the first time because of the unavailability of injured trio Brian O'Driscoll, Paul O'Connell and Rory Best.

Four penalties from Jonathan Sexton gave Ireland a 12-3 lead they deserved but they were picked apart after the interval as South Africa recovered from a sluggish first half.

"We were a little bit frustrated we weren't further ahead at half-time," Heaslip said.

"They were quite clever about how they played the game when they had the ball. I don't know how many opportunities we had.

"But we were still very confident and focused on what we had to do. We knew they'd have a purple patch, but felt we could keep our momentum."

The result condemned Ireland to their fifth successive Test defeat, their worst sequence since 1998, and follows their 60-0 drubbing by New Zealand in June.

Springboks coach Heyneke Meyer was delighted with the way his side were transformed after the interval.

"There were a few harsh words said at half-time. The first half was unacceptable, nothing worked," he said.

"We showed a lot of character coming back like that and I'm very proud of the team."

"He's much better and is out of hospital now. We'll make announcements as soon as possible," Meyer said.