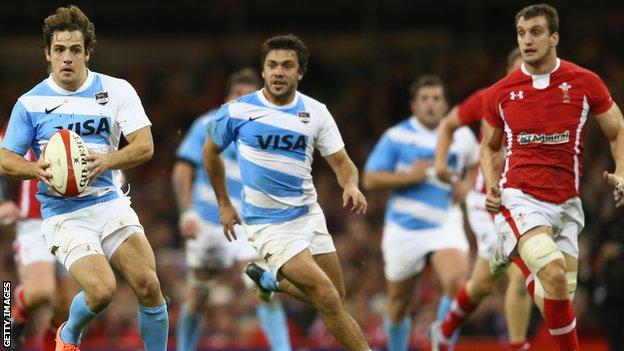 Wales Captain Sam Warburton says his team was guilty of basic errors during their defeat to Argentina in the opening game of the autumn Test series.

Wales were 9-6 ahead at the interval but tries from Juan Imhoff and Gonzalo Camacho saw Argentina secure victory.

It was the fourth defeat in a row for the Six Nations champions, who face Samoa at the Millennium Stadium on Friday.

"Wales were very lacklustre and very flat, they just weren't at the races. They are a far better side than what they showed. They have got to have a good look at themselves and really pick their standards up next week and for the rest of the autumn series."

"I don't think we did the basics very well," Warburton said.

"We set ourselves a challenge first half [to] come back in the lead, which we were.

"[We] went out second half and two tries killed us - and they came out a lot better at the start of that second half than we did.

"Their tails were up then and they're the sort of side - you give them a lead like that and you could just see it lifted them. That was really disappointing."

The 26-12 win was Argentina's first victory at the Millennium Stadium since November 2001.

But Warburton denied that Wales underestimated the Pumas, who finished bottom of the southern hemisphere's Rugby Championship.

"They performed very well and we expected a tough match so we definitely didn't underestimate them," Warburton said.

"They've been playing the Championship down south and that will be the tempo they've been used to.

"That's the tempo we tried to play and we wanted to work them. I don't think we worked them as hard as we might have just because of a lack of accuracy and phase play."

Centre Jamie Roberts and lock Alun Wyn Jones were forced to leave the field during the defeat and their injuries are being assessed by Wales medical team.

Roberts lasted 22 minutes before being laid out in a sickening clash of heads, while Jones damaged his left shoulder in a collision with opposite number Manuel Carriza.

But Warburton does not believe the loss of Roberts and Jones contributed to Wales' defeat. "It wouldn't have changed the players psyche if those players went off," he said.

"There's a very strong 23 we had out there. I thought we had a great bench with guys like Mike [Phillips] and Paul James, great players to come on.

"[For] Jamie to go off and somebody who I think is a world-class player, James Hook, to come on is a great thing to see."