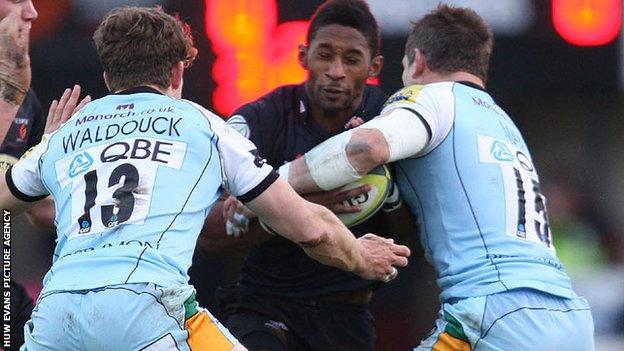 Tonderai Chavhanga's hat-trick was not enough as the Dragons fell to their second LV=Cup defeat at home to Northampton.

The Dragons were ahead 10-6 at the interval through Chavhanga's opening try and Tom Prydie's boot.

Northampton hit back with tries from Phil Dowson and Jamie Elliott while Chavhanga added two further tries for the home side.

Ryan Lamb scored five penalties, a drop goal and a conversion for Saints.

"It was tough coming down to Wales and we played against a very committed side.

"It was a nervy first half - we conceded tries we shouldn't have but overall I thought we dominated the game. Our forwards were very good and Ryan Lamb put us in the right positions.

"It's something to build on and we look forward to next week.

"We've got two tough league games coming up and I was pleased with the lads who came in."