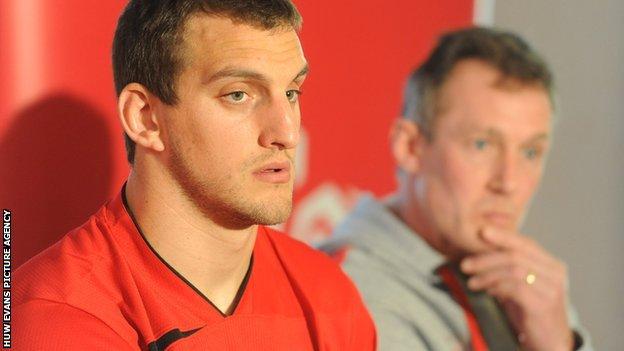 Wales captain Sam Warburton has been dropped to the bench for Friday's match with Samoa in Cardiff.

Justin Tipuric replaces Warburton at open-side flanker, while Ryan Jones takes over as captain on his return to the side at blind-side flanker.

Dan Biggar and Mike Phillips form a new half-back pairing and Ashley Beck comes in at centre instead of Scott Williams.

Warburton's selection on the bench gives Jones the honour of becoming the player to captain Wales on most occasions, breaking the 28-match record he held jointly with Ieuan Evans.

"Ryan reaches an impressive personal milestone, it will be a huge honour for him but in the context of what happened last week his and the team's priorities are about producing a performance," said Wales interim coach Rob Howley.

Tipuric replaced Warburton for the final 10 minutes in Saturday's 12-26 defeat by Argentina and has won praise for his performances for Ospreys this season.

Warburton, though, has admitted he has failed to find his best form in a struggling Cardiff Blues side, who have lost five of eight Pro12 games this season.

With Dan Lydiate already ruled out with injury, the back-row changes means that only number eight Toby Faletau remains of the unit that performed so impressively for Wales in the 2011 World Cup and the victorious 2012 Grand Slam campaign.

Alun Wyn Jones (shoulder) and Josh Turnbull (knee) - both ruled out for the rest of the series - and Matthew Rees (calf) were unavailable for selection, but Jamie Roberts passed a fitness test on Wednesday to continue at centre despite suffering "mild concussion" against the Pumas.

His new partner will be Beck, who played all three Tests on the summer tour to Australia in Roberts's absence with a knee injury.

"With a short six day turnaround it was important for us to freshen things up and also make use of the competition for places we have within this squad, something which has been a key ingredient for the success of the squad over the last 18 months," added Howley.

"In making changes we also needed to bring in some genuine experience.

"It is important to have leaders throughout the team and we are hoping the likes of Mike Phillips, who made a positive impact last week, can bring his experience to the side."

Samoa warmed up for the encounter with a comprehensive 42-12 win over Canada at Eirias Park, Colwyn Bay on Friday.

One of the six changes to that side includes the return of Ospreys scrum-half Kahn Fotuali'i.

Wales will be seeking to avoid a fifth successive defeat under interim coach Howley, who is deputising will Warren Gatland fulfills British and Irish Lions duties.