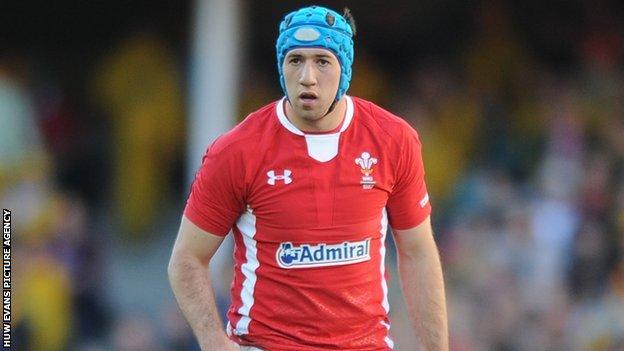 And he says Wales need a fresh selection approach after their 26-12 defeat by Argentina.

Six-cap Tipuric, 23, is challenging Wales captain Sam Warburton, of Cardiff Blues, at open-side while Biggar, 23 and with 10 Wales caps, could take over from Scarlets fly-half Rhys Priestland.

However, Warburton could switch to blind-side flanker instead of Josh Turnbull in a reshuffled back row.

Jones would also be happy to see a potentially fit-again Ryan Jones return to the back row after a shoulder problem.

And ex-Wales and Swansea captain Jones believes Howley should ignore the trend set by Warren Gatland of "neglecting" regional form after seeing those players trusted with the Welsh jerseys fail to rise to the Pumas' challenge.

"I think that he [Howley] felt this was his best side going into the game," said Jones.

"There might have been a question mark at half-back with Mike Phillips.

"But I think Rob Howley and Warren Gatland have been so used to neglecting regional form - because they felt that when they come into the environment that they've set up within the Welsh camp - these players lift their game when they put on the Welsh jersey.

"They actually perform - they become the players that we're so used to seeing them [be with Wales].

"There are players out there who are playing well. I think we have to consider that and take that on board.

"It's not just about reputation any more, it's about players who are firing and performing and Rob Howley, this week, has a real selection dilemma.

"This isn't about two warm-up games for the two big ones at the end of this campaign [against New Zealand and Australia].

"It's about winning this match and he has to put his best side on the field.

"What his best side is remains to be seen.

"Ryan Jones might be available as well so there's a lot of quality coming back, potentially, as well.

"I think he should [bring in Tipuric and Dan Biggar].

"It's where you play Justin Tipuric or who you play him with.

"He's on top of his game and I think we just have to find a place for him."