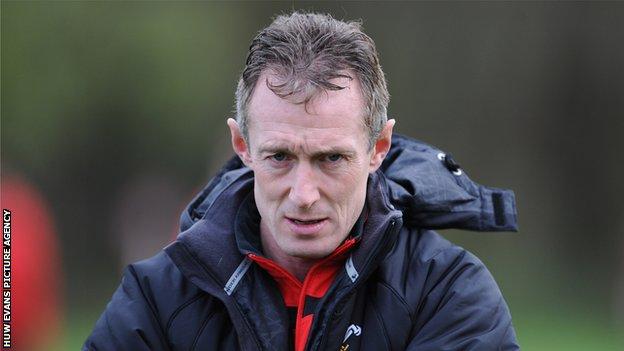 He said: "Robert Howley is being paid a lot of money to turn the fortunes of Welsh rugby round. If he can't do it then he needs to step aside.

I don't think swapping players round is going to do anything if they continue to play that type of non-contact, non-physical rugby

"I don't think highly-paid coaches should start blaming other people for the lack of performance."

Thorburn said team selection was fine but Wales got the tactics wrong.

"There were good enough players in terms of quality to have made a far better game of it." added the former full-back, who captained Wales between 1989 and 1991.

"I don't think actually you would have picked any different players. I just think they got the game plan wrong and didn't actually drive at the heart of the Argentinean defence.

"I don't think swapping players round is going to do anything if they continue to play that type of non-contact, non-physical rugby."

Thorburn was speaking as Wales start their preparation in an attempt to avoid a fifth successive defeat under Howley when they take on Samoa at the Millennium Stadium on Friday night.

In the latest IRB world rankings Wales remain in sixth place despite the loss to Argentina, who have moved up to seventh less than half a point behind.

Howley was expected to announce his side to face the Samoans on Tuesday but that has been put back 24 hours to allow the coaches and medical staff further time to assess injuries and player recovery.

There could be enforced changes to his line-up with both Jamie Roberts and Alun Wyn Jones suffering injuries against the Pumas.

Howley had indicated he does not expect Roberts (mild concussion) and lock Jones (shoulder) to be available.

Jones is having a scan to assess the seriousness of his shoulder injury.

If Scarlets centre Jonathan Davies overcomes the groin problem that ruled him out of contention against Argentina, he could join team-mate Scott Williams in midfield against the Islanders.

But he has only taken a limited part in training, while Ashley Beck (hip) is on course to train fully this week along with Ryan Jones, who has returned from the Wales camp in Poland with a shoulder problem.

Luke Charteris, who is available after playing for Perpignan at the weekend, and Cardiff Blue Bradley Davies will be in a battle to replace Jones.