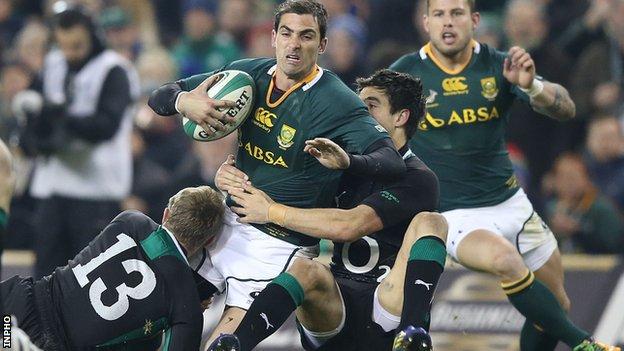 Declan Kidney believes Ireland's 24 November match against Argentina will be their biggest since the World Cup.

Defeat could put the under-pressure Irish in danger of slipping into the third tier of seeds in the draw for the 2015 World Cup.

Ireland, who have lost their last five Tests, are now eighth in the world rankings, one place ahead of Scotland.

"We are there again, aren't we? It will be a World Cup qualifier in lots of ways," admitted coach Kidney.

Argentina were emphatic winners against Wales last Saturday and have replaced Ireland in seventh place in the IRB standings.

Their only comfort was Scotland's expected defeat by New Zealand which meant Ireland's place in the second tier of teams in the rankings has not come under immediate threat.

Ireland play Fiji at Thomond Park in an uncapped international this Saturday - but the clash with Argentina a week later seems to be foremost in the coach's thoughts.

"We must get the right balance between testing combinations, giving guys a run and freshening things up," said Kidney.

"The players definitely haven't forgotten how to win, they are still confident in what they are trying to do. I know they are going to click.

"We have had ourselves in some situations like this in the past and but we just have to stick with it because we know it will turn.

"This is a good group of players to work with, they are totally different to the one from 2008."

Four years ago the Irish had faced a similar World Cup scenario, and they got the win over Argentina they needed to remain among the second tier of seeds.

Coach Kidney said Paul O'Connell is unlikely to have recovered from his back injury in time to face the Pumas.