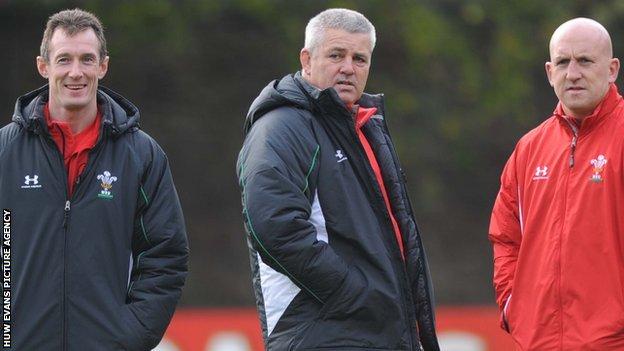 Defence coach Shaun Edwards says Wales did not miss Warren Gatland in their build-up to their 26-12 defeat by Argentina because "he'd been there throughout the preparations".

Gatland's main role this season is as 2013 British and Irish Lions coach to Australia.

Edwards added: "We didn't miss him [Gatland] at the weekend."

Gatland was at Ireland's defeat by South Africa on Saturday, then took in New Zealand's win over Scotland at Murrayfield on Sunday.

A Lions spokesperson says Gatland's only fixuture commitment in the next round of autumn Tests will be at England v Australia on Saturday.

On Friday, Wales face Samoa with Edwards revealing Howley and Gatland have been in close contact during Wales's autumn series.

"Warren's been fully part of the preparations, really, in that, as regards selection, he spoke to Rob, he speaks to Rob every day," said Edwards.

"And I think any team… I've come out and said this before, Gats is probably the best coach in the world so we're pretty lucky in Wales to have him and did we miss him at the weekend?

"Really the fact that he'd been there throughout the preparations, I'd have to say no, we didn't miss him at the weekend.

"But would we miss Warren Gatland if he left Wales?

"Of course we would, because in my opinion he's one of the premier coaches in the whole rugby world."

Howley's stint as caretaker coach began earlier than planned after Gatland suffered a double-heel break in a domestic accident in May.

The Welshman's temporary term began with victory against the Barbarians in June, then three defeats against Australia down under and Saturday's loss to the Pumas.

A fifth successive loss on Friday against Samoa would be Wales' worst run since 2010, when Gatland was in total charge.

The New Zealander will return to guide Wales into their 24 November encounter with the All Blacks and the 1 December meeting with the Wallabies.

After that, Howley will reclaim the reins for Wales's Six Nations and Grand Slam defence.