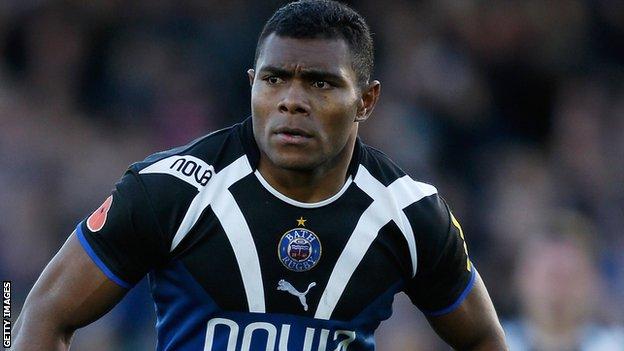 Wing Semesa Rokoduguni has dedicated his debut performance for Bath to his fellow soldiers in the Army.

The 25-year-old Fijian, a reconnaissance tank soldier in the Royal Scots Dragoon Guards, was signed by the Premiership club last month.

His two tries on Saturday helped the club to a 36-15 victory over Newport Gwent Dragons in the LV= Cup.

"The guys in my regiment in Canada were hopefully watching the game so this is for them," he told BBC Radio Bristol.

"It's also for the rest of the guys in Afghanistan, who are doing what they do best."

Rokoduguni was spotted playing for the Army's rugby side and was offered a full-time contract after a successful trial at the Rec.

He scored his first try only eight minutes into the match and went over for his second in the closing stages after switching to centre at half-time.

"To be honest I am speechless," he said.

"To play here, for one of the best Premiership clubs is awesome. Overwhelming is probably the best word to describe it.

"When I first came in to rugby I found it quite hard with all the different phases, but I'm getting there and I'm really enjoying it.

"It was a fantastic opportunity to show the guys what I am capable of doing."