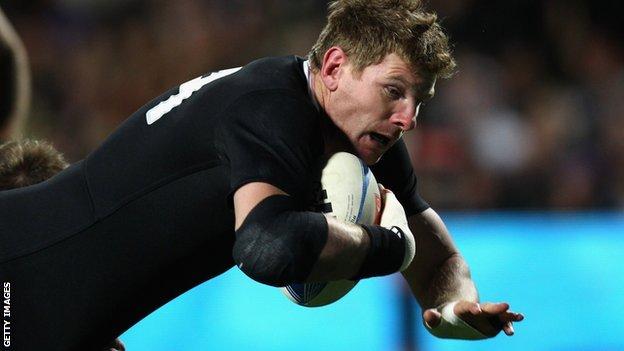 New Zealand's Adam Thomson and Rob Simmons of Australia have been cited following the weekend internationals.

Flanker Thomson was cited for "stamping or trampling" on Alasdair Strokosch's head, for which he was yellow-carded in Sunday's 51-22 win over Scotland.

Lock Simmons was reported for a dangerous "tip tackle" on Yannick Nyanga in their 33-6 loss to France.

Both players will attend disciplinary hearings in London on Wednesday ahead of this weekend's matches.

The All Blacks play Italy in Rome on Saturday, while Australia face England at Twickenham, yet the pair could both face bans that end their involvement in their teams' European tours.

New Zealand have games against Wales and England to come following their meeting with Italy, while the Wallabies are also scheduled to play Italy and Wales.

In the event that he is suspended, Thomson could be ruled out of action for between three and eight weeks.

He was reported by the independent International Rugby Board citing commissioner, Ireland's Murray Whyte, following the 43rd-minute incident.

Referee Jerome Garces sent him to the sin-bin after advice from touch judge Simon McDowell.

Asked afterwards whether it should have been a straight red card awarded to Thomson, Scotland head coach Andy Robinson said: "You would think so."