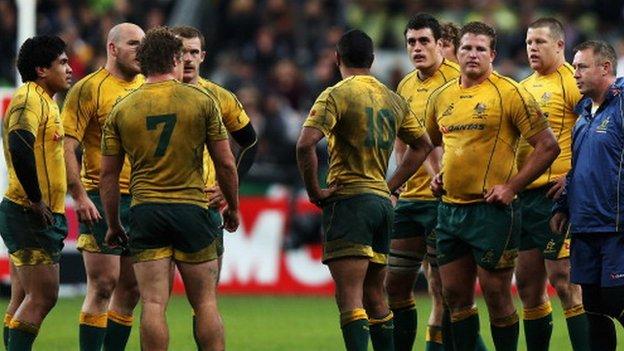 England coach Stuart Lancaster has warned that Australia will be a "different animal" to the side that was beaten 33-6 by France on Saturday.

"There is bound to be a reaction," said Lancaster ahead of Saturday's Test against the Wallabies at Twickenham.

"We recognise the challenge that is coming our way. They are a side with character and resilience. We need to make sure we are ready."

England were totally dominant in their 54-12 defeat of Fiji on Saturday.

Australia, on the other hand, were obliterated in the scrum as France ended a run of five defeats to the Wallabies, whose coach Robbie Deans admitted Les Bleus were "too good" for his team.

The France defeat compounded what has been a difficult few months for an Australia team which has been criticised for their performances in the Rugby Championships, although they did draw 18-18 with New Zealand last month.

"It was only a couple of weeks ago they pushed the All Blacks and we are expecting that type of performance this weekend," said Lancaster, who enjoyed his first victory since taking permanent charge of the side.

"We've got a confidence that's building in our side but equally we're wary of a team that's been beaten and the reaction it will create.

"They're not ranked second in the world for nothing. They have performances in them that are of a high quality and I'm sure they'll be ready for us on Saturday."

France's victory took them above England to fourth in the world rankings, which could prove to be significant when the draw for the 2015 Rugby World Cup is made on 3 December.

England, who play Australia, South Africa and New Zealand in the forthcoming weeks, need to regain their place in the top four if they are to be among the top seeds for their home tournament.