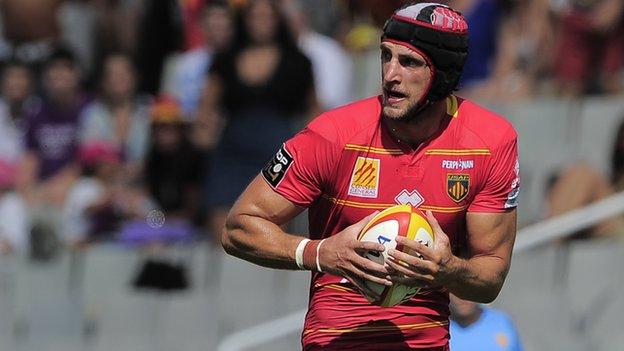 He said: "If you ask all the boys or you're watching the Top 14 - all the Welsh boys are standing out and they're all playing really well.

"I think that can only be a good thing for Wales."

Phillips came off the bench to replace Tavis Knoyle against the Pumas in Cardiff on Saturday, while loose-head prop Jenkins was in the starting line-up.

Hook took over at centre from concussion victim Jamie Roberts in the 24th minute.

Later on that day, Charteris played 80 minutes as Perpignan lost 15-3 in Biarritz after Wales agreed to release the 29-year-old for club duty in return for securing his availability on 1 December.

That date falls outside the agreed autumn Tests window, meaning clubs are no obliged to release their players for internationals.

Charteris, who left Newport Gwent Dragons at the end of last season, has no regrets over his move despite the Welsh management having made clear their desire for top stars to ply their trade in Wales.

"When we signed to go over there we knew this is what's going to happen.

"We knew if we were not available for all the pre-tournament camps it's going to be harder for you.

"I think from the coaches' point of view they've got so many players coming through and so many players here, they've picked the best nine on form - that's Tavis [Knoyle].

"They've picked him to play and that's got no relation to whether Mike [Phillips] was in Bayonne or playing in the Ospreys or Cardiff - they've made the decision to pick the best nine.

"And from an individual point of view all we can do is make sure that we're playing better than we were playing over here.

"And I think if a player goes over to France and is improving - and I think if you ask all the boys or you're watching the Top 14 - all the Welsh boys are standing out and they're all playing really well.

"I think that can only be a good thing for Wales."

And having missed Wales's pre-series training camp in Poland, Charteris denies he is less-well prepared than his team-mates and rivals for the rigours of Test matches.

However, he concedes he has to quickly become familiar again with Welsh calls.

"You're match sharp, you're playing in tough games and playing physical games. And I think that side of it is no problem.

"The only down side is not being around the boys - you've got to switch back to different calls.

"That's where the only challenge comes in a few days of training to try and iron all that out and get the French out of my head and the English back in."